“The Bricklayer”, by Noah Boyd (Harper) 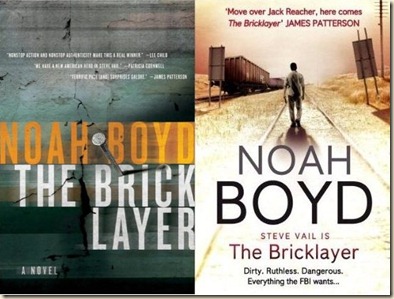 A woman steps out of the shower in her Los Angeles home and is startled by an intruder sitting calmly in her bedroom holding a gun. But she is frozen with fear by what he has to say about the FBI – and what he says he must do…

A young agent slips into the night water off a rocky beach. He's been instructed to swim to a nearby island to deposit a million dollars demanded by a blackmailer. But his mission is riddled with hazardous tests, as if someone wanted to destroy him rather than collect the money…

Steve Vail, an ex-FBI agent fired for insubordination, has resigned himself to his dismissal and is content with his life as a bricklayer. But the FBI, especially Deputy Assistant Director Kate Bannon, needs help with a shadowy group that has initiated a brilliant extortion plot. The group will keep killing their targets until the agency pays them off, the amount and number of bodies escalating each time the FBI fails. One thing is clear: someone who knows a little too much about the inner workings of the Bureau is very clever – and very angry – and will kill and kill again if it means he can disgrace the FBI.

Vail's options, and his time to find answers, are swiftly running out.

One thing is for sure: this is a pretty quick read. The story is quickly-paced, and the dialogue clipped and pretty realistic. The premise is an interesting one, and I’ve been looking forward to reading the novel ever since I saw it featured on the Sony eBookstore website a couple months ago.

There are, however, a couple of issues with The Bricklayer. First off, Vail is a little too… “perfect” would be the wrong word; he’s too modest, too cool, too noble, and a little too ideal. He’s a bit clichéd, as anti-authority and –establishment types go. In general, the characters that populate the novel aren’t as compelling as some of the more-established crime thriller protagonists – be they Harry Bosch (Michael Connolly), Lucas Davenport and Virgil Flowers (John Sandford), or Jack Reacher (Lee Child), all of which had depth and multiple, non-contrived layers even in their first outings.

Kate’s attraction to Vail is almost immediate, the progression of their relationship (personal and professional) is almost clock-work and highly predictable (wait until you get to the last page – it’s exactly what you’ll be expecting). The attraction she feels for him is perhaps understandable (he’s the typical brooding, noble type – which would actually make him rather boring to be around in real life), but it leads to some pretty weird statements and observations, like this one:

“Vail turned back toward her, and she could see his heart beating against the lean muscle of his chest”

Really? Wouldn’t his rib-cage get in the way of this? It’s simple things like this that make The Bricklayer stand-out as an obvious debut novel. I sometimes imagine I might write like this… Before an editor hit me over the head and told me to re-write it…

There’s plenty in here that is good, interesting, original, and almost all of it shows promise. But to really break out from the pack of “other thriller authors”, Boyd will have to become more comfortable writing, play less to genre tropes, and flesh out his characters more to make us care about them.

The Bricklayer is written with a good degree of authenticity, thanks to the author’s past as an FBI investigator. His prose are very clipped and well-paced, and there’s very little chaff to slow down the story. The case unfurls at a decent clip, more or less always making sense, and there are some pretty interesting and original elements included in the story.

Not the best thriller I’ve ever read, but certainly not the worst. This, sadly, is not enough. With so many great thriller authors out there – both established (like those mentioned above), and up-and-coming authors, it’s difficult to see Boyd really breaking out of the pack for the time being, or at least on the strength of The Bricklayer alone. I’ll be keeping an eye on Mr Boyd’s writing in the future, and I hope he becomes more comfortable in the genre to experiment a little more, delve a little deeper into character-building. If he manages that, he will become a thriller-force to be reckoned with.

I don’t like to post negative reviews, but I just wasn’t taken with this novel. Boyd didn’t make me care enough about the characters.

It’s a promising debut, but there’s still a way to go.