Ok, so I know that’s way in the future, but saw this cover on Amazon UK, so thought I’d share it:

Death is no stranger in the city of Erisin, but some deaths attract more attention than others. When a prostitute dies carrying a royal signet, Isyllt Iskaldur, necromancer and agent of the Crown, is called to investigate. Her search leads to desecrated tombs below the palace, and the lightless vaults of the vampiric vrykoloi deep beneath the city. But worse things than vampires are plotting in Erisin - a long-dead sorceress is making a bid not only for renewed life but for the throne as well, and Isyllt's former lover is caught in her schemes. Soon Isyllt is torn between the living and the dead, between the man she still loves, and the royal family she's sworn to defend.

As a sorcerous plague sweeps the city and demons stalk the streets, Isyllt must decide who she's prepared to betray, before the city built on bones falls into blood and fire.

(CR review of The Drowning City can be found here.)

This also got me thinking about other books that are heading to shelves soon, so here’s a quick run-down of some other upcoming Orbit titles… 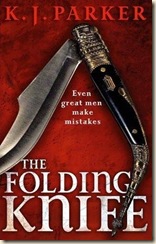 Basso the Magnificent. Basso the Great. Basso the Wise. Basso the Murderer. The First Citizen of the Vesani Republic is an extraordinary man. He is ruthless, cunning and, above all, lucky. He brings wealth, power and prestige to his people. But with power comes unwanted attention, and Basso must defend his nation and himself from threats foreign and domestic. In a lifetime of crucial decisions, he's only ever made one mistake. One mistake, though, can be enough.

I’ve only read one book by K.J, Parker, The Company (review here), and it was very good, even if Parker’s prose style can lean towards the ponderous. Always good, but sometimes one can find oneself wishing for something a little faster-paced.

The last Stormlord is dead. War has come to the cities of the Quartern. The violent, nomadic Redunners have put every rainlord they could find to the sword and the cities are left without hope.

Shale has been betrayed, drugged, and left at the feet of his greatest enemy. Now, he must decide to work with those who have plotted against him or let thousands of the waterless die. He has great power but is no Stormlord. At least, not yet…

Terelle has escaped the Scarpen in search of her homeland and her people, the mysterious Watergivers. But a desperate message will send her back to find Shale and face her worst fears.

The people of the Scarpen are in danger. Shale and Terelle must find a way to save their people and punish those who have destroyed all they ever loved.

I recently received The Last Stormlord in the post, so expect a review of this very soon. I only have one or two books before it in the queue, so hopefully within a couple weeks. 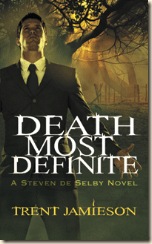 Steven de Selby has a hangover. Bright lights, loud noise, and lots of exercise are the last thing he wants. But that’s exactly what he gets when someone starts shooting at him.

Steven is no stranger to death-Mr. D’s his boss after all-but when a dead girl saves him from sharing her fate, he finds himself on the wrong end of the barrel. His job is to guide the restless dead to the underworld but now his clients are his own colleagues, friends, and family.

Mr. D’s gone missing and with no one in charge, the dead start to rise, the living are hunted, and the whole city teeters on the brink of a regional apocalypse-unless Steven can shake his hangover, not fall for the dead girl, and find out what happened to his boss- that is, Death himself.

This sounds a little like Terry Pratchett’s Reaper Man, only set in the contemporary world, rather than the Discworld. Here’s part of the blurb for Reaper Man:

Death is missing - presumed... er... gone - which leads to the kind of chaos you always get when an important public service is withdrawn.

I am still really looking forward to this.

Another two notable, eagerly-awaited (and forthcoming) Orbit releases are Kevin J Anderson’s The Map of All Things (June 2010), and Brent Weeks’ The Black Prism (August 2010).