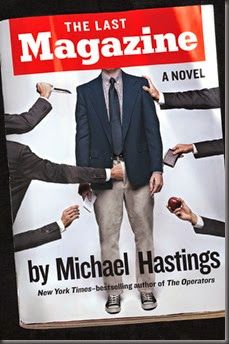 A dual-personality novel from the late journalist

The year is 2002. Weekly newsmagazines dominate the political agenda in New York and Washington. A young journalist named Michael M. Hastings is a twenty-two-year-old intern at The Magazine, wet behind the ears, the only one in the office who’s actually read his coworker’s books. He will stop at nothing to turn his internship into a full-time position, and he’s figured out just whom to impress: Nishant Patel, the international editor, and Sanders Berman, managing editor, both vying for the job of editor in chief.

While Berman and Nishant try to one-up each other pontificating on cable news, A.E. Peoria — the one reporter seemingly doing any work — is having a career crisis. He’s just returned from Chad, where, instead of the genocide, he was told by his editors to focus on mobile phone outsourcing, which they think is more relevant. And then, suddenly, the United States invades Iraq — and all hell breaks loose. As Hastings loses his naïveté about the journalism game, he must choose where his loyalties lie — with the men at The Magazine who can advance his career or with his friend in the field who is reporting the truth.

Michael Hastings was one of the best young journalists in America before his death last year. Best known, perhaps, for his Rolling Stone piece that got General Stanley McChrystal fired (a media and political furore that was overblown in the extreme, in my opinion). He wrote excellent books (including The Operators, a much-expanded account of his time with McChrystal) and excellent feature articles for multiple publications. He also, as it turned out, wrote The Last Magazine, a fictional account of his time at Newsweek. Published posthumously, it took me a while to get my hands on the book, and I have very mixed feelings about what I found.

The Last Magazine is a novel of two alternating parts, really. The first, and by far the best, follows Michael Hastings (the character) as he navigates a low-on-the-totem-pole job at The Magazine – a thinly-veiled analog of Newsweek. This side of the story is peppered throughout with interesting, shrewd and intelligent observations about the print media industry in the United States, and also the media coverage of American politics and the post-9/11 invasion of Iraq. It really is superb, actually – true, Hastings was benefiting from hindsight, but he was long a critic of the media’s capture by government, and the rise of media personalities more interested in their own exposure, reputations and “genius” than reporting the damned news. Some of the characters will be recognizable for followers of US media and politics (Nishant is clearly meant to be a caricature of Fareed Zakaria, for example).

I really enjoyed the commentary on news magazines and the US media and official response to, rhetoric on and actions leading up to the invasion of Iraq and afterwards. Some of the best media criticism in any genre I’ve read.

What really spoiled things for me, though, was the second part of the novel. This thread followed the trial and tribulations of A.E. Peoria, one of The Magazine’s writers. Peoria’s escapades are heavy on literary gonzo elements – some good, some really not so much. I wondered if some of it channeled some of Hastings’s own own experiences in Iraq, or what he saw there. Certainly, it felt like parts of the story were being run through a Hunter S. Thompson/early Matt Taibbi filter. It’s a strange way to write journalism and fiction, one that is not easy to pull off (most don’t and can’t, in fact). When it works, the results can be incredible (Thompson, Taibbi), but more often is fizzles and comes across as either a mess or somewhat adolescent at best. Hastings makes a valiant attempt, but for me he didn’t manage to quite pull it off. For one thing, why do we need such long chapters about Peoria’s proclivities? An entire chapter about a masturbatory event? A chapter on his sexual adventures in Thailand? (How so very unoriginal…) It often feels unnecessary, and like an attempt to force “edginess” into the novel. Which is a pity – if he’s stuck with the fictionalised media and political commentary, this could have been a rousing success.

Ultimately (and sadly), the novel feels like a draft was rushed to publication. This does not read like a finished, properly edited novel. This is a real pity, and I wish they’d taken the time to get it polished before publishing. To me, it seems clear why Hastings hadn’t tried to get this published during his life: I have a feeling he didn’t think it was ready.

The Last Magazine is, nevertheless, worth a read if you are a fan of Hastings’s non-fiction, and if certainly if you’re interested in US media and politics.