Quick Review: THINKING ABOUT IT ONLY MAKES IT WORSE by David Mitchell (Faber) 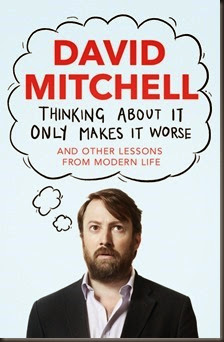 Why is my jumper depreciating? What’s wrong with calling a burglar brave? Why are people so f***ing hung up about swearing? Why do the asterisks in that sentence make it okay? Why do so many people want to stop other people doing things, and how can they be stopped from stopping them? Why is every film and TV programme a sequel or a remake? Why are we so reliant on perpetual diversion that someone has created chocolate toothpaste? Is there anything to be done about the Internet?

These and many other questions trouble David Mitchell as he delights us with a tour of the absurdities of modern life – from Ryanair to Downton Abbey, sports day to smoking, nuclear weapons to phone etiquette, UKIP to hotdogs made of cats. Funny, provocative and shot through with refreshing amounts of common sense, Thinking About It Only Makes It Worse celebrates and commiserates on the state of things in our not entirely glorious nation.

David Mitchell is a comedian, actor, writer and the polysyllabic member of Mitchell and Webb. He won BAFTAs for Peep Show and That Mitchell and Webb Look, and has also starred in Jam and Jerusalem, The Bleak Old Shop of Stuff and Ambassadors. He writes for the Observer, chairs TheUnbelievable Truth, is a team captain on Would I Lie To You? and has been in two films, neither of which made a profit.

I have long been a fan of David Mitchell’s television work – That Mitchell & Webb Look, Peep Show (which I was actually didn’t love at first), the all-too-short Ambassadors mini-series, and his frequent guest spots on QI and Have I Got News For You being my favourites. After I listened to the audio edition of his superb memoir, Back Story, my respect for him grew even more (it’s among my top ten ‘reads’ of the year, easily). I didn’t know how frequently he had been writing for the Observer, however, so I was pleasantly surprised when I received a review copy of Thinking About It Only Makes It Worse. This is a great read.

It’s very difficult to review this book, however. With so many articles on such a wide-range of topics, it’s impossible to give as broad a review as one might like – the temptation to share pull-quote after pull-quote is difficult to resist, as is the wish to walk through each of the topics one-by-one. It might take away the need to actually read the book for yourself. Here are a handful of good moments, though, to whet your appetite…

On the economic crisis and fallout:

The global fiscal Wile E. Coyote had long since run off the edge of the cliff and had been scampering ineffectually in mid-air for some time. But now the period during which he has yet to start falling, because he still hasn’t noticed the absence of solid ground beneath him, was ending. We’d collectively looked down. We were caught in the beat of stillness, the panicked look to camera, that precedes the plummet.

It turns out that it’s not the morality or otherwise of our foreign policy that predominantly affects the national mood, it’s money. We might not have thought we were money-obsessed, but then we probably don’t think we’re oxygen-obsessed. But you certainly get to thinking about it if someone takes it away.

The horrible shock of 2008, much more than any horrible shocks we allowed our military to impose abroad, changed our national personality. It’s as if Britain was a sprightly and twinkly pensioner who then, in the autumn of 2008, had a serious fall. It survived but has never been quite the same – it’s more timorous and judgmental, envious and angry. As a nation, we’ve lost confidence and creativity, and we’re readier to blame each other and slower to laugh at ourselves.

One of the topics that really struck a chord with me was the rise of the eternally offended society. This topic grew out of Mitchell’s coverage of the banking crisis and its fallout, describing it as an era-defining shift:

[T]his new era has been enormously and relentlessly recriminatory and angry. What started off as righteous fury at the investment banker community for their incompetence and amorality has spread to almost every aspect of public life

It is an era in which “Freedom of speech is sacrificed at the altar of manufactured rage”. Mitchell touches upon jingoism, political-correctness, the awfulness of the UK electoral options (before and after the most recent election), and a general shifting in the British mood and culture. He doesn’t use the phrase, but I’d say he paints a picture of a country moving more towards an American-style social aspect at its worst (more self-involvement, narcissism, and inexplicable emotional exaggeration).

As someone employed in a number of media, Mitchell’s opinion as an insider and shrewd observer (some might say bluntly, refreshingly honest observer) are more than welcome, too. On the fiction/entertainment side, Mitchell laments that “In television, for all that people talk of creativity, the percentage game is in being deftly derivative”. As for the news media:

The media’s obsession with conflict means that we’re confronted with it so relentlessly that we’ve stopped questioning why it’s there in the first place. We ask: “Which side is right? Who do I support?” but not: “Do they really need to be arguing about this? Why is so much of our time taken up by listening to small minorities who are incensed by other small minorities, rather than to the vast majority who just want to rub along OK?”

And, finally, I’d like to share this great moment, in which Mitchell discusses the Cookie Monster (it makes perfect sense in the larger context of the piece in which it appears, but is also superb on its own):

The Cookie Monster is anarchic, dynamic and madly driven by a very specific, but also totally random, aim: he wants cookies. He wants to charge around crazily smashing cookies into his mouth. He will never get enough cookies. It’s unclear whether he understands this. Maybe he imagines some future stage of sated calm which he might achieve if, miraculously, he were to obtain all the cookies he desires. Or maybe he is wiser than that and knows it’s all about the journey, his endless quest for biscuits.

Needless to say, I really enjoyed this book. And could keep quoting passages until I blew right past the fair usage policy for reviews. I read the book pretty quickly, and would have happily read even more. I didn’t love every article included, but I’d say 90% of them made me at the very least smile at the humour, and I agreed with the vast majority of them, too. It is, of course, to see the humorous side of the book, but it must be said that the jokes do not bury the serious points Mitchell is making and the topics he is writing about. This book is proof positive that a great comedian is, quite often, also highly intelligent. (He is a Cambridge man, after all.)

Very highly recommended, this is a great, must-read collection.

Thinking About It Only Makes It Worse is published in the UK by Faber & Faber, on November 4th, 2014.