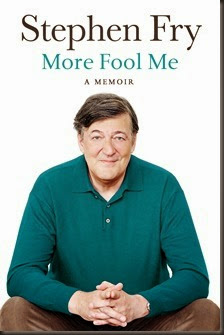 Stephen Fry invites readers to take a glimpse at his life story in the unputdownable More Fool Me.

It is a heady tale of the late Eighties and early Nineties, in which Stephen – ever more driven to create, perform and entertain – burned bright and partied hard with a host of famous and infamous friends, regardless of the consequences.

This electric and extraordinary book reveals a new side to Mr. Fry.

Stephen Fry is an award-winning comedian, actor, presenter and director. He rose to fame alongside Hugh Laurie in A Bit of Fry and Laurie (which he co-wrote with Laurie) and Jeeves and Wooster, and was unforgettable as Captain Melchett in Blackadder. He also presented Stephen Fry: The Secret Life of the Manic Depressive, his groundbreaking documentary on bipolar disorder, to huge critical acclaim. His legions of fans tune in to watch him host the popular quiz show QI each week.

I listened to the Audible edition of this biography. And, much like The Fry Chronicles, it is both entertaining and excellently produced. Fry’s performance is, as can be expected, superb – welcoming, honest, and rather whimsical. This is another excellent memoir, and superb audiobook.

More Fool Me starts of somewhat… meandering. Fry seems to get rather easily distracted and diverted by side-topics in the first couple of hours. For example, he give us quite a long disquisition on the history of cocaine use. They are all interesting diversions, and at no point was I bored, but it did have the effect of making the memoir feel a little padded towards the beginning.

Then, however, Fry really gets into his story, and takes us through a whole host of topics and his memories of various projects that many will be familiar with. He’s honest about how there is a fair bit of overlap between More Fool Me, The Fry Chronicles and his first memoir, Moab Is My Washpot (which I haven’t read or listened to, but would rather like to, now). Each time, it seems, he’s added details  to events in his life – perhaps because he felt finally comfortable talking about them? For example, More Fool Me could also quite easily be renamed Fry’s Cocaine Chronicles – I had no idea just how fond he was of the powder.

The format of the book shifts from more general memoir to reproducing his diary (for 1993, mainly). He writes about his writing process – for the novel, The Hippopotamus; about Blackadder and its reception; and a whole host of other greats. There was the potential for this to get rather tedious, but I think Fry has selected by far the most interesting and quite endearing entries. It was never boring. As with many of the other comedian memoirs I’ve listened to, I loved seeing the connections between Fry and other leading names in British comedy and acting.

I ended up binge-listening to this audiobook. It’s entertaining, self-deprecating, and very honest. Fry writes/speaks very highly of his friends and collaborators – all of whom he seems genuinely happy for when they succeed and care for them when they don’t – he speaks especially fondly and respectfully of Hugh Laurie. More Fool Me still doesn’t bring us up-to-date (not even close), so I guess this means there will be at least one more to come. I hope it’s quite soon. There are many moments that stick out, but I especially liked when Prince Charles and Princess Diana stopped by for tea…

Posted by Civilian Reader at 4:21 AM