“This Is How It Starts”, by Grant Ginder (Simon & Schuster) 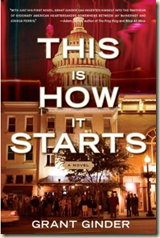 An insider’s look at Washington, D.C., through the eyes of an atypical protagonist

Taylor Mark is a recent graduate, newly employed by California Congressman John Grayson, a less-than-brilliant member of the House. Guided by the experienced hand of his best friend from college, Chase Latham, and his well-connected lobbyist family, Taylor gets to know the inner-workings of the city, and how deals and decisions are made behind the scenes, and as the stakes climb higher, the boundaries between right and wrong, legal and illegal become blurred as actors play to win.

“Secrets are currency.” This Is How It Starts is a personal tale of one young idealist’s journey through modern-day Washington, D.C. A satirical look at the tedium of working in American politics, stripped of the glamour, patriotism, and style we’ve come to expect through multiple viewings of The West Wing. Taylor navigates his way among the egos, the affectations, the snobbery, and politics. His new world is populated by those whom David Brooks, a columnist at New York Times, dubbed “BoBos” – the Bohemian Bourgeoisie. Totally wrapped up in their own lives and microcosmic world, they are prone to small-minded prejudices(couched in high-mindedness), not to mention institutionalised racism and bigotry. It’s a fascinating appraisal of a strata of society considered so exclusive, but in actuality one that has considerably unpleasant attributes.

Taylor Mark is an unusual protagonist for a political novel. He is neither driven by some inner thirst for political power, nor through any burning sense of civic duty and idealism (such as Richard North Patterson’s Kerry Kilcannon character), and he is certainly not former-military (see Vince Flynn’s Mitch Rapp novels). Taylor Mark is a Chandler-esque character (the one from Friends): he is self-deprecating, self-conscious, not entirely successful with women, and somewhat overshadowed by his best friend, Chase. Chase, on the other hand, is your typical, brash trust-fund baby. Taylor’s family and past has contributed significantly to his character, and Ginder expertly weaves scenes from the past into the narrative to help us understand our ‘hero’.

Ginder is a strong writer – his prose flows nicely, and he has a gift for writing snappy dialogue and interesting, three-dimensional characters. As a debut, this is an assured, frequently funny novel about a post-collegiate idealist’s attempts to make it in the capital. Taylor Mark is an endearing protagonist, and is an entertaining guide through Washington’s young-elite society. The humour is well done, never forced or laid on too thick, but not laugh-out-loud funny (a blessing, as attempts at political ‘lol’ moments rarely, if ever, succeed in being funny). The pace and plot could have done with some streamlining, as I found it slower to get going than I would have expected. Taylor is, however, an interesting and insightful guide to this less-than-praiseworthy side of Washington, and the story will still keep your attention and hold your interest throughout.

Overall, a good novel that I enjoyed reading, and I would recommend it to anyone interested in this genre. If you like Christopher Buckley’s novels (e.g. Thank You For Smoking, Boomsday), then you should like this as well (although Ginder’s tale is nowhere near as zany as Buckley’s plots can be).

Email ThisBlogThis!Share to TwitterShare to FacebookShare to Pinterest
Labels: Fiction, Grant Ginder, Political, Review, Simon and Schuster, This Is How It Starts