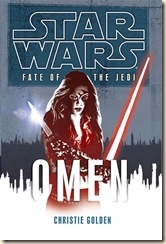 Luke Skywalker continues his search into the reason for Jacen’s fall, the Jedi Order remains in crisis, and a hidden enemy re-emerges

In Outcast, Luke Skywalker was exiled from his home, Coruscant; two Jedi knights were afflicted by an unknown illness; and the Jedi Order was sent reeling as they were assailed by the very people they have sworn to protect. Omen, the second volume in the Fate of the Jedi series, picks up right where the first finished, but ups the ante. The pall of suspicion hanging over the Jedi – a souvenir from the authoritarian reign of Darth Caedus, remains in place. The Chief of State, Daala, continues to search for ways to undermine and blunt the Jedi.

Jysella Horn, sister of one of the afflicted Jedi (Valin Horn), has succumbed as well. With three victims, the Jedi Masters are starting to notice a pattern – each victim has displayed mastery of a Force technique they had no business knowing in the first place. This leads Luke and the other Jedi to more urgency in their quest to recreate Jacen Solo’s Force pilgrimage, and to discover and understand why he turned to the Dark Side.

In Omen, We learn a little more about Jacen’s voyage, as Luke and his son, Ben, visit another planet of secretive and xenophobic Force-users; Cilghal and her team of researchers back at the Jedi Temple delve deeper into the mysterious Jedi-sickness, while acting Grand Master Kenth Hamner struggles to keep the politics and politicians at bay; the backstabbing politics and media of the Galactic Alliance encroach on the Jedi again as they are forced to dodge reporters and explain why their members are turning into destructive, delusional lunatics; Han and Leia foil another dangerous, rogue-Jedi scheme; and the mysterious Tribe, a group of Sith marooned millennia ago on the planet Kesh (described in the events of Precipice) emerge into the light of day, ready to reclaim the galactic dominance they believe to be their birthright.

Omen, like every other major Star Wars fiction release has lived up to expectations. Christie Golden, a newcomer to the authorial fold, has penned an enjoyable story, picking up where Aaron Allston left off and making it her own. The story proceeds with quite a clip and I found myself burning through it faster than the norm, in part because of Golden’s writing style and also the excellent composition of the story. The author has delved a little deeper into the culture and traditions of the Keshiri Sith. Strangely (at least to begin with), the story thread for the Sith runs two years behind that of the main plot. Luke and Ben’s journey introduces us to more and deeper understanding of new aspects of the Force and how it works in the Galaxy. The new characters are interesting and well-crafted, the dialogue believable and well executed.

Overall, a very enjoyable read. If only they were releasing these books quicker…

Highly recommended to all fans of Star Wars and science fiction.