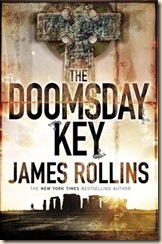 In The Doomsday Key, James Rollins takes his readers on a twisting journey through history and across the world, as a deadly conspiracy seeks to deal with one of the world’s most acute problems in its own brutal way. The action is truly global, taking in Britain, Venice, the Vatican, Mali, and the United States - this novel’s scope is broad and ambitious.

A dead village in 11th Century Britain, a massacre at a Red Cross food research station in Africa, a midnight murder and explosion in the Vatican, and the torture and murder of a Princeton scientist – all these mysterious events are linked somehow. After three victims in the present day are found to have similar markings branded onto their dead bodies, Sigma Force is called in to investigate further, to ascertain why these people had to die, and what is the link to the past? On top of this, what is the connection with the international, secretive and broad-mandated Viatus Corporation...?

The plot of The Doomsday Key, as with all Sigma Force novels, is born out of historical facts and mixed with Rollins’s great imagination. In this case, the first is the Doomsday Book, which is William the Conqueror’s survey of 11th Century England and its peculiar description of certain towns with the word, vastare, meaning “wasted”. Máel Máedóc, an Irish Catholic priest, wrote a book claiming to list all the popes who would come until the end of the world. The list of prophecies has been surprisingly accurate up until now, with a plausible description of the current pope, Benedict XVI, who is the 111th pope. The problem is, the world is meant to end after the 112th pope. Along with the tragic events described above, these two historical mysteries combine to form a compelling and entertaining plot and puzzle for Commander Pierce, Sigma Force, and their allies to solve.

Old friends and enemies make some reappearances in The Doomsday Key: Seichan, the beautiful and deadly Eurasian assassin with a complicated shared past with Pierce; the mysterious Guild, an international secret society with vast reach, resources and global influence; and Rachel Verona, an Italian Caribinieri from the Fine Arts division, who contacts Pierce for help when her uncle is caught in the aforementioned explosion.

Rollins has a real talent for taking well-known and obscure historical facts, texts or curiosities and using them to spin compelling and entertaining thrillers. His skill at extrapolating exciting, action-packed plots from a couple of historical oddities is a true gift, and his novels should remain best-sellers for this very reason for years to come. If I had just one quibble about this novel, it would be the way Rollins has succumbed to the common American way of writing British characters – all rather quaint and too civilised, in a setting that’s far more idyllic than reality. It’s not a major issue, as this doesn’t detract from the story at all, and Rollins doesn’t go anywhere near the full Dick van Dyke-route that some American authors insist on when writing about Britain or British characters.

The author’s fluid prose and tight plotting made this a relatively quick read, and this time around he’s really managed to get the story nailed down – it was easier to get sucked in, quicker, than previous Sigma Force novels. Add to this a few high-speed vehicular chases, and an increased disregard for the safety of antiquities (thank god this is a novel!), making The Doomsday Key a very fine addition to the series and the action-adventure genre as a whole.

A highly entertaining read, The Doomsday Key and the series as a whole come highly recommended.

Posted by Civilian Reader at 1:36 AM