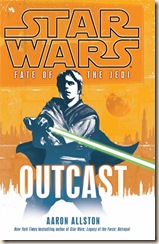 A new chapter in the saga begins…

Outcast follows directly in the footsteps of the Legacy of the Force series. The Galactic Alliance is in crisis following the death of Darth Caedus and the end of the Second Galactic Civil War. New Chief of State Natasi Daala (who first appeared in Jedi Search) orders the arrest of Luke Skywalker for failing to prevent Jacen Solo’s fall to the Dark Side. Behind this order is a growing backlash against the Jedi, as a result of media-fuelled resentment, and an increasingly hostile government, who decide that every Jedi should be accompanied by a government observer, to make sure they don’t take the law into their own hands, as usual. (In fact, when Daala is explaining this to Luke, she makes some interesting points about the episode in A New Hope, when Obi-Wan’s immediate reaction in the Mos Eisley Cantina is to chop off some limbs…)

After making a deal with Daala, Luke is exiled for ten years from Coruscant and contact with the Jedi Order he created – unless he can discover the cause of Jacen’s fall, and also put in place policies to help prevent history from repeating itself. Accompanied by his son Ben (from whose perspective much of the novel is written), Luke attempts to recreate the journey Jacen took in between the events of the New Jedi Order and Legacy of the Force series. His search brings him first to the planet Dorin, where his quest could have dire consequences for his life and his order, ending before it really has the opportunity to begin.

Meanwhile, two Jedi Knights have been affected with a strange condition, making them believe all other Jedi have been replaced with imposters. The causes of this are not revealed in Outcast, but they first appeared in Millennium Falcon, which suggests they will play a major part in the rest of this series.

There’s quite a lot that is set in motion in just one novel, but Allston has done a brilliant job of setting the scene for the eight books to come in the series, revealing just enough to get our interest piqued for future volumes. While Luke and Ben don’t feature as much in the novel as would be suggested by the main premise, their relationship has grown closer over the years, ever since Jacen tortured Ben in an attempt to turn him into a Sith. As previously mentioned, Ben gets a good deal of attention in this novel, perhaps slowly replacing Luke as a key character? Without knowing exactly how the series will progress, it’s difficult to be sure. The thread of the story involving Han and Leia doesn’t appear particularly relevant to the main storyline, but the fact that it’s included again suggests that all will be revealed later in the series.

Allston’s writing remains top-notch, and his prose is still tight and well-paced. Even though it is the first of nine, Outcast is a very engaging read, populated by some of our favourite characters, all of whom have grown and matured since we last read about them. There are obviously story-threads being laid out for future volumes, but they don’t feel forced, and instead will pique the readers’ interest for the series.

As an opening salvo in the next chapter of the Star Wars saga, Outcast will do exactly what it was intended to: grab your attention and make you eager for more. Exceptional sci-fi writing, Allston has proved that the Star Wars franchise has plenty of life left in it, and Fate of the Jedi is a promising addition to the ever-growing Star Wars canon, improving on the quality of the excellent Legacy of the Force.

For those wanting to get up-to-date quickly without having to wade through the ever-growing range of Star Wars novels, Del Ray have handily created this PDF primer to help set the scene.

Posted by Civilian Reader at 4:52 PM