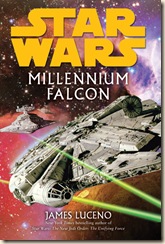 Ever since we first saw the Millennium Falcon in the Mos Eisley scenes of A New Hope, the ship has been a favourite of Star Wars fans the world over. In this novel, James Luceno takes on the task of giving us a look at the ship’s history, while also setting scene for the next round of Star Wars novels.

Starting with the ship’s creation (when it wrecked a portion of the assembly plant it was created in) to some notable owners along the way (including a circus, travelling doctor, a crime lord, and two professional gamblers, to name but a handful), the novel takes two paths. The main one follows Han, Leia and Allana Solo as they trace the Falcon’s history backwards, starting their search with Lando Calrissian. The second thread follows Jadak, one of its first owners, tracing its lineage forwards. The two storylines eventually join, of course, as a hitherto forgotten mystery resurfaces. When Allana discovers an antique transponder hidden among the bulkheads of the Falcon, the family are hooked on discovering its purpose (partly as an excuse to keep themselves occupied, trying to come to terms with the events of Invincible).

With backstage elements pulling certain strings in the hope of finding this mysterious, historical “treasure”, and the Falcon reputed to be the key to its location, Han and his family unwittingly are drawn into the ruthless, lethal treasure hunt. Chief among their rivals is a powerful lawyer, Oxic, an avid, ruthless collector of Republicana who believes the treasure is a piece of unique value (though, of course, specifics aren’t revealed to the reader).

Millennium Falcon is a unique novel in the Star Wars canon. Considering the one constant throughout the various threads running through it is a ship, it’s incredibly engaging. The short scenes and chapters that focus on a specific, important event or turning point in its 100-year history add more detail and another layer to the already vast Star Wars universe. New characters, such as Jadak and Poste, let us find out more about life in this universe and also allow for some more action and diversions to keep us guessing.

This is the second novel by James Luceno that I’ve read (following Star Wars: The Unifying Force), and I must say he’s an excellent author. His prose are well-crafted and fluid, and his plotting gives you just enough in each chapter to force you on to the next, and then the next. He also allows the reader’s imagination to fill in the blanks, rather than laboriously laying everything out in great detail, making for a sparse, enjoyable and entertaining read.

The book bridges the gap between the Legacy of the Force and Fate of the Jedi series. While it does feel a little like filler, it properly sets down some seeds for the upcoming series. Luke Skywalker crops up only a couple of times, and never in person, explaining some of the situation and political environment on Coruscant at the time (things aren’t looking good for the Jedi). But, on the whole, it works well as a novel in itself, and is an enjoyable read. For those who haven’t read the past few books, that’s ok, as there’s a brief run-down of events that have led up to this volume (p.71) to catch you up.

Certainly one of the better Star Wars novels released in the past couple of years, Millennium Falcon is a great introduction to the larger story of the Fate of the Jedi series.

Action-packed, a treasure hunt with ruthless rivals, and just a touch of political intrigue. A perfect mix, and very enjoyable. Highly recommended.

Followed by: “Outcast”, by Aaron Allston