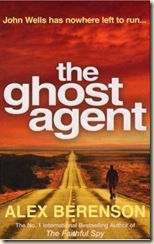 A second outing for Agent John Wells, hero of The Faithful Spy

John Wells is recuperating from the closing events of The Faithful Spy. While his body has healed, he is mentally unsuited to his new circumstances. Stuck in the US, no operations to keep himself active or occupied, he sneaks out at night for high-speed jaunts on his motorbike, much to the annoyance and concern of his boss and lover, Jennifer Exley. Together with Shafer, they form an agency-within-an-agency division of the CIA, granted considerable leeway and access after their previous successes.

Then, two operations come to Wells, Exley and Shaffer’s attention. The Taliban in Afghanistan are evolving, with better tactics resulting in more US casualties and fewer for them. At the same time, a mole in North Korea has had his cover blown, leading to the deaths of his extractors. Wells and company are put to work investigating these two developments, and Wells loses himself in the search for who has been providing and paying for the extra training. This leads them to another case, involving the revelation of a Chinese mole within the CIA, who has been feeding state secrets to his handlers for almost a decade.

Longer than The Faithful Spy, Berenson’s second novel is a much better book. While his debut was a great action thriller, there was something still missing from the mix. In The Ghost Agent, Berenson has pulled out all the stops, ratcheting up the action and tension, delving deeper into geopolitics, and overall writing a much, much tighter, more engaging and exciting novel. In almost every way, this is a better novel, improving on an already good writing style and gift for plotting. In this novel, Berenson allows the overall plot to unfold at a natural pace, never giving away too much, but not throwing any curve-balls, either. In many ways, this is a very realistic thriller; the bigger picture of power politics all to familiar and plausible.

As with the other great authors in this genre, there is more to The Ghost Agent than mere thrills. Berenson’s got a keen eye for international relations and history (especially the Chinese history he brings into the story), and paints interesting and rather accurate portraits of the national characters involved (Chinese, American, Iranian, etc.). His protagonists are well-drawn and three-dimensional, and the reader will therefore easily sympathise with their problems and characters (especially Wells and Exley’s troubled relationship). His antagonists are sufficiently twisted, though not comical or cartoon-ish, with General Li especially scary: cool, calculating, and single-minded, he’s a true believer who takes things into his own hands and won’t let anything (including the US and his own government) get in his way.

Double-agents, gunfights, espionage, plenty of political intrigue, suspense and action will ensure that any thriller junky will thoroughly enjoy the novel. Highly recommended.

Posted by Civilian Reader at 11:00 PM