“The Deceived”, by Brett Battles (Preface) 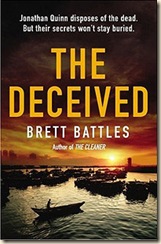 Quinn is a professional “cleaner”. The man you call when you have a body that needs disposing of without leaving a trace, and making sure there are no loose ends. Called out on a job by some unsavoury characters running some docks at a major port, he is confronted with the dead body of Steven Markoff. Markoff saved Quinn’s life many years ago, when he was just starting in the business, and to find his body in a shipping crate leaves Quinn with no choice but to find out who is responsible.

Aided by his apprentice Nate, and his beautiful ally Orlando, he traces Markoff’s girlfriend, Jenny, who has also mysteriously disappeared while working for a congressman with his eyes on the White House. As Quinn starts to unravel what is going on, it is clear that things are much more deadly than he could have ever imagined.

Brett Battles must be one of the best new thriller writers on the scene today. His prose are clean and fluid, drawing you along with the story as Quinn searches for Jenny, trying to get to the bottom of Congressman Guerrero’s possible involvement in Markoff’s murder.

It wouldn’t be a Battles story without some globetrotting, and in The Deceived we have the usual state-hopping in the US, followed by Singapore, where the Congressman is travelling and where Orlando’s computer wizardry tells Quinn to go. As someone who has lived in Singapore, I can tell you that Battles really brings the island nation to life in his descriptions, perfectly evoking the atmosphere and uniqueness of a number of famous locations (e.g. Clarke Quay, Orchard Road).

Another thing that makes this novel stand apart is that the story is not particularly action-oriented. Sure, there are a few explosions and gun fights, but this is more of a slow-burning, character-driven thriller. We learn more about Quinn’s past, more about his training and so forth. His relationship with his protégé Nate develops, as he starts to surprise and anticipate Quinn. The difficult relationship with Orlando is revisited also.

Battles’ writing is amazing, pretty much flawless. You will be pulled along by his prose, and find yourself completely immersed in the story. He is a truly exceptional writing talent.

Series Chronology: The Cleaner, The Deceived, The Unwanted (UK)/Shadow of Betrayal (US)

Posted by Civilian Reader at 3:30 AM