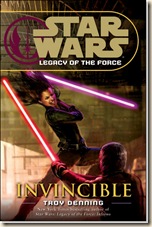 And so we come to the explosive end...

(This will be a short review through necessity, as any great description of the plot will ruin it for everyone not yet caught up.)

Troy Denning has really rolled up his sleeves and got stuck into the gritty nature of civil war (expanded to galactic scope, here) and the tragedies and atrocities that war can compel people to commit. Moral dilemmas and personal anguish beset almost every character, and we are left wondering at the end about a number of them, their fates left open and in flux.

Invincible is more brutal than pretty much any previous Star Wars novel or movie. The battles between Jaina and Jacen/Caedus, infused with anger and grief, are described in amazing, gruesome detail - so much so that you feel like you're actually there as the lightsabers and blood (and a couple of body parts) fly all over the place.

Perhaps one reason Invincible doesn't fall foul of last-installment pitfalls is because it's not, ultimately, a last installment. There will be more novels to come with the characters we all continue to love (next up, chronologically, is Millennium Falcon – there’s an appetite whetting sample chapter at the end of this paperback). Invincible ends on a pretty grim note, but also with a hint of hope for the future.

Excellent plotting, excellent humour (though not too much, otherwise the impact of the final battle would have been diminished), good pacing, and allegory done very well and deftly, Invincible is one of the best Star Wars novels to come out over the past few years, and Legacy of the Force certainly blows all of the previous long series out of the water, by keeping relatively short and not tying itself into knots.

If you haven't started the Legacy series yet, get started so you can get up to speed and enjoy this cracking, gripping final chapter!

Posted by Civilian Reader at 3:33 AM