Books that Fell Through the Cracks (Late Acquisitions)

Given my peripatetic existence over the last couple of years, there have been a number of address changes. These have resulted in a number of books getting sent to old and/or obsolete addresses. I’m currently visiting one of these old addresses, and have finally managed to get my hands on the following books (below) – so, apologies to publishers for not saying thank you, and hopefully I’ll be able to get to some of these soon (two in particular are very high on my TBR mountain, now). 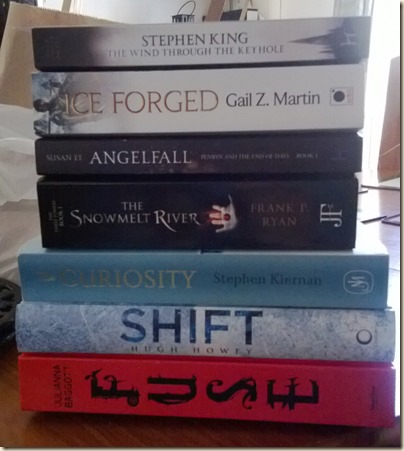 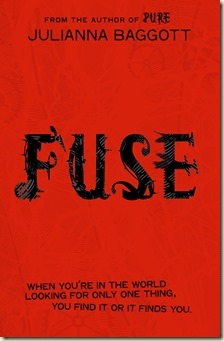 After a young Wretch is abducted by the Dome and ‘cleansed’ of her fusings and imperfections, she is only able to repeat the Dome’s latest message: ‘We want our son returned. This girl is proof that we can save you all. If you ignore our plea, we will kill our hostages one at a time.’ Willux will go to any lengths to get his son Partridge back, including murder. Partridge sacrifices himself and returns, in the hope of taking over the Dome from within, only to uncover more of his father’s chilling, dark secrets.

Outside the Dome, Pressia, Bradwell, and El Capitan are decoding the secrets from the past – tucked away in one of the Black Boxes – to uncover the truth that might set the wretches free of their fusings forever. Those fighting Willux will be pushed over boundaries, both land and sea, heart and mind, in their quest – further than they ever imagined.

This is the sequel to Pure, which I also (shamefully) haven’t had a chance to read. It sounds like a fascinating series, but I kept missing it for one reason or another. Now that I have this second novel, as well as an ARC for book one, I really don’t have much excuse (save lack of time…) to read it. I’ll do my best to get to it soon. 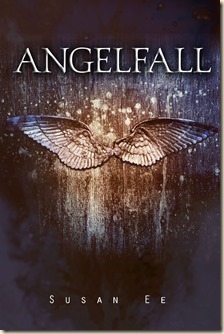 It’s been six weeks since angels of the apocalypse descended to demolish the modern world. Street gangs rule the day while fear and superstition rule the night. When warrior angels fly away with a helpless little girl, her seventeen-year-old sister Penryn will do anything to get her back.

Anything, including making a deal with an enemy angel.

Raffe is a warrior who lies broken and wingless on the street. After eons of fighting his own battles, he finds himself being rescued from a desperate situation by a half-starved teenage girl.

Traveling through a dark and twisted Northern California, they have only each other to rely on for survival. Together, they journey toward the angels’ stronghold in San Francisco where she’ll risk everything to rescue her sister and he’ll put himself at the mercy of his greatest enemies for the chance to be made whole again.

I kept seeing this advertised on the London Tube after I got back in January. I was intrigued, certainly (there seems to be a rise in Angel-related fiction in the past couple of years – some good, some not so much), and so when I was told a copy of this had arrived for me, I decided to place it relatively high on my TBR pile. I’ll hopefully get to this very soon (ah, those Famous Last Words, again…). I have sent some interview questions to the author, too. 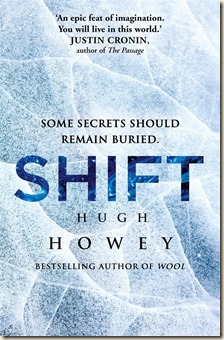 In a future less than fifty years away, the world is still as we know it. Time continues to tick by. The truth is that it is ticking away.

A powerful few know what lies ahead. They are preparing for it. They are trying to protect us.

They are setting us on a path from which we can never return.

The history of the silo is about to be written.

Our future is about to begin.

I still have to read Wool before I can get to this, but I’ve heard a great many people say they enjoy the series. Ill-considered blog posts that the author may write notwithstanding, there is something about the series’s premise that intrigues me. So, I suppose I’ll get to it relatively soon, if I feel in the mood for some dystopian fiction (which is more often than not). 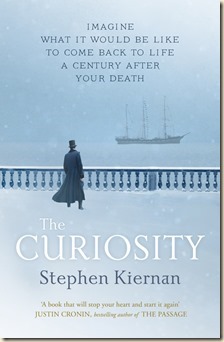 A haunting love story in which a man frozen for 100 years wakes up in today’s America to be hounded by tabloids, condemned by religious conservatives, and hunted by a presidential candidate while he strives to come to terms with his unique second life, one in which he falls in love with a beautiful scientist from a century after him.

Maverick scientific genius Erastus Carthage has developed a technique to bring frozen simple-celled animals back to life. But when his Arctic research vessel discovers a body encased in an iceberg, he seizes the chance to apply his pioneering process to a human being. The man Carthage’s lad awakens from death is Jeremiah Rice, a Massachusetts judge, who was born in 1868 and fell overboard in 1906. Jeremiah is an instant celebrity – chased by paparazzi, vilified by the religious right, and overwhelmed by a society he sees as brilliant and diverse but also vulgar and violent.

As his only ally biologist Kate Philo attempts to protect him from financial and political exploitation, the two fall in love. Meanwhile, Jeremiah’s time on earth is slipping away.

I hadn’t heard anything about this, until my sister mentioned it had arrived and she’d read (and enjoyed) it. It sounds rather intriguing, certainly, so I may have to read it within a week or two. 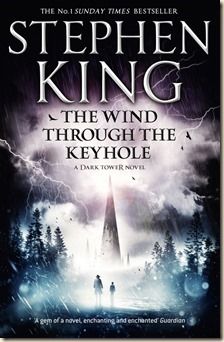 Stephen King, The Wind Through the Keyhole (Hodder)

Stephen King returns to the rich landscape of Mid-World, the spectacular territory of the Dark Tower fantasy saga that stands as his most beguiling achievement. Roland Deschain and his ka-tet – Jake, Susannah, Eddie, and Oy, the billy-bumbler – encounter a ferocious storm just after crossing the River Whye on their way to the Outer Baronies. As they shelter from the howling gale, Roland tells his friends not just one strange story but two... and in so doing, casts new light on his own troubled past.

In his early days as a gunslinger, in the guilt-ridden year following his mother’s death, Roland is sent by his father to investigate evidence of a murderous shape-shifter, a “skin-man” preying upon the population around Debaria. Roland takes charge of Bill Streeter, the brave but terrified boy who is the sole surviving witness to the beast's most recent slaughter. Only a teenager himself, Roland calms the boy and prepares him for the following day's trials by reciting a story from the “Magic Tales of the Eld” that his mother often read to him at bedtime. “A person’s never too old for stories,” Roland says to Bill. “Man and boy, girl and woman, never too old. We live for them.” And indeed, the tale that Roland unfolds, the legend of Tim Stoutheart, is a timeless treasure for all ages, a story that lives for us.

I have never read any of King’s Dark Tower series, despite always seeing it in bookstores (on both sides of the Pond). The series, begun in 1974, gained momentum in the 1980s, and was concluded between 2003-2004, after the final three volumes were published. This is apparently a novel that can stand on its own for readers new and old (Goodreads lists it as “Dark Tower #4.5”). I think I’ll probably still try to hunt down at least the first book, before diving into this. It’s high on my Life Reading Priority list, but I’m not sure how quickly it will make its way onto the top of the TBR mountain. (I think I’ll probably read King’s On Writing, first, as I already own that…) 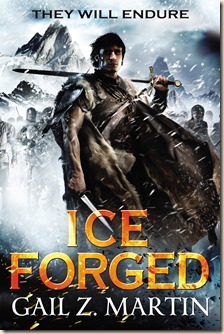 Condemned as a murderer for killing the man who dishonored his sister, Blaine “Mick” McFadden has spent the last six years in Velant, a penal colony in the frigid northern wastelands of Edgeland. Harsh military discipline and the oppressive magic of the governor’s mages keep a fragile peace as colonists struggle against a hostile environment. But the supply ships from Dondareth have stopped coming, boding ill for the kingdom that banished the colonists.

Now, McFadden and the people of Velant decide their fate. They can remain in their icy prison, removed from the devastation of the outside world, but facing a subsistence-level existence, or they can return to the ruins of the kingdom that they once called home. Either way, destruction lies ahead...

I am really interested in reading this series. I recently got the second volume, so now that I have picked up this as well, I hope to get to it ASAP.

Also on CR: Guest Posts “It’s the End of the World as We Know It (Again)” & “After Apocalypse” 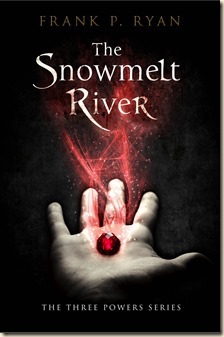 Chance has brought together four young people in the small, historic Irish town of Clonmel. Alan is Irish-American, Kate Irish, and the adoptive brother and sister Mark and Mo are Londoners although Mo originally hails from Australia and has an exotic spiritual quality that suggests something strange, almost magical, about her. They discover that they share a terrible secret, one that cannot be coincidence, and it makes them wonder if it was fate, and not happenstance, that really brought them together, and which now binds them inseparably as friends. And then, over the long hot Irish summer, the enchantment begins... The Snowmelt River is the first of a four-volume epic fantasy series, with each book a separate adventure in itself. All four novels revolve around the coming of age, and power, of the central characters, Alan, Kate, Mark and Mo, each a very different personality, yet each making his or her personal contribution to an epic odyssey.

Another series I didn’t know much about, before this came along (it’s possible this is the second copy that’s arrived – as I faintly recall seeing the second book at some point…). Not sure when I’ll be able to get to it, but I’ve heard and read some interesting things about it.

Any of these grab your attention? Received anything good I should know about, or that I (or CR readers) might like?