Author Andrez Bergen introduces us to his third novel, Who is Killing the Great Capes of Heropa?, and talks about his influences and inspirations. 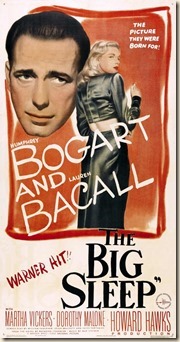 The first time I saw the 1946 film version of The Big Sleep, I would’ve been about six or seven years of age. My parents were fans – Mum loved Lauren Bacall and my dad aspired to be Humphrey Bogart. With these familial pressures in the mix, at such an impressionable size, of course I was sucked in. Not long later I copped a viewing of the 1941 John Huston vision of The Maltese Falcon, and found myself enamoured with cinematic film-noir years before I even knew what it was.

This affection has been an ongoing affair.

I’ve seen both flicks at least a hundred times apiece, and it translated into the original novels by Raymond Chandler and Dashiell Hammett. That led to poring over still more by these fellows, things like The Long Goodbye, The Thin Man and the Continental Op. I love these yarns, consistently won over – no matter how old I am – by the scathing dialogue, the sarcasm and the oddball characters as much as I am by the “detective mystery” plots involved. 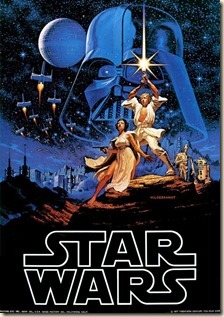 On another level there’s always been science fiction, everything from kindergarten days terrified of the Daleks in Doctor Who, through to reruns of classic Star Trek and This Island Earth (1955) in primary school, Blade Runner (1982) in my teens, and Terry Gilliam’s Brazil three years after that. I was smitten with Episode IV when it was just plain Star Wars (1977).

Third cab off the rank is a life-long obsession involving comic books.

I’d say this started when I was learning how to read and my dad subscribed me to British comedy weekly Cor!!, while scouring the pictures gracing Hergé’s Tintin in the local library. Then, again around the age of seven, I was spending summer holidays at my grandparents place in the Melbourne suburb of Richmond. Since my Nan spent so much time cooking and my grandpa was in the living room multitasking with Aussie rules footy on the TV and horseracing on the radio, we were left to our own devices.

In a small shed out the back, covered in old cement sheeting, I uncovered a treasure-trove: silver age Marvel Comics from the 1960s, inside boxes half-eaten by snails and earwigs. These refugees had belonged to my older half-brother Peter, and included Marvel originals of The Fantastic Four, The X-Men and The Avengers – many without covers – along with black-and-white reprints published in British weekly Fantastic. 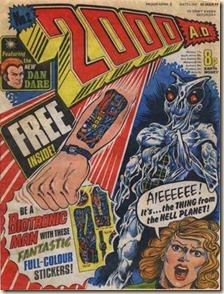 By the time I was ten, Melbourne had a mini-renaissance of Marvel reprints via the short-lived Newton Comics imprint, and in 1976-77 I subscribed first to British weekly comic Action (which had sensational, somewhat violent tales like “Hook Jaw” and “Death Race 1999”) and then a title called 2000 AD – the second issue of which introduced Judge Dredd.

And so it goes from there.

This over all mishmash of hardboiled noir, comic books, sci-fi, barely repressed violence, humour and eccentric characters always was going to affect (or should we say infect?) the imagination of an impressionable loner of a kid who wanted nothing more than to grow up to be (a) an astronaut (unlikely since I hated maths), (b) an author, (c) a comic artist, or (d) a film maker.

Funnily enough, despite haphazard attempts to the contrary, I didn't end up being any of these.

After uni I slipped instead into journalism, I started up a record label, and began producing techno and experimental electronic music under a silly alias named Little Nobody (I still use it occasionally). One of the reasons I moved to Tokyo in 2001 was to pursue this muzak and hack journalism. Oh, and the food too.

But the love of writing fiction, of losing myself in other worlds – and an affection for other people’s noir, sci-fi and comic books, regardless of nationality – has continued to hold steady sway.

No surprise, then, that my first published novel Tobacco-Stained Mountain Goat (2011) was an amalgam of detective noir, dystopian sci-fi, and homage to the cinema of both genres and others as well.

Which brings us (more or less) up to speed, and the publication in September of novel number three: Who is Killing the Great Capes of Heropa? It is a beast of a book that I hope brings the influences full circle. It’s my love-letter not just to noir, pulp and sci-fi, but also to American comic books of the golden and silver ages – basically, 1940-70. 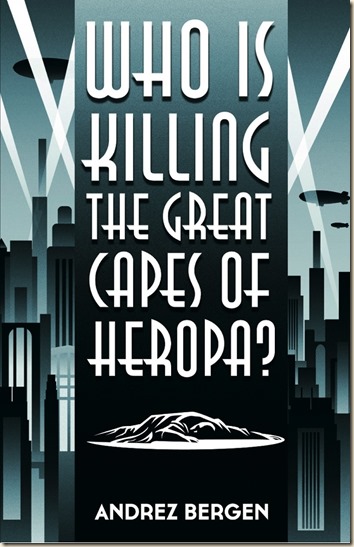 We are taken into dystopian, near future Melbourne, Australia – the last city on Earth. But we visit this city only fleetingly; most of our time is spent hooked up to an IV drip and electrodes, with our consciousness in a virtual world called Heropa.

As the name of the book implies, this is a murder-mystery of the Sam Spade kind.

Someone is bumping off the Capes (heroes and villains both) for real. There’re leads and red herrings aplenty, undercut by the relationship between members of superhero team the Equalizers – a group that’s seen far better times, has lost its leader, the members squabble a lot, and they rarely trust one another.

Into this fray steps idealistic Jack, a.k.a. Jacob, a.k.a. Southern Cross, forced to come to grips with his oddball, egocentric teammates while tracking down their killer(s).

Within the context of the story lie nods and winks to the great creators.

And Little Nobody makes a cameo – as a corpse the same size as Ant-Man.

There’re dozens of other references, but I don’t want to give too much of the game away – in spite of the train-spotter’s refs, or perhaps because of them, the novel is my personal salute to these styles I continue to cherish.

And if it succeeds (on a deceptive sliding scale) of achieving a fraction of the nourishment these genres have imparted to me, then I’ll do a self-satisfied George W. Bush aircraft carrier jig wearing a home-made cape cut from a tablecloth, and sign off with “mission accomplished”.

Posted by Civilian Reader at 5:11 PM