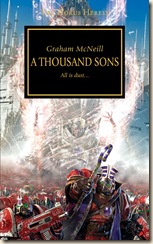 Introducing the enigmatic, psychic, and misunderstood Sons of Magnus

Censured at the Council of Nikea for his flagrant use of sorcery, Magnus the Red and his Thousand Sons Legion retreat to their home-world of Prospero to continue their use of the arcane arts in secret. But when the ill-fated primarch foresees the treachery of Warmaster Horus and warns the Emperor with the very powers he was forbidden to use, the Master of Mankind dispatches fellow primarch Leman Russ to attack Prospero itself. But Magnus has seen more than the betrayal of Horus, and the witnessed revelations will change the fate of his fallen Legion, and its primarch, forever.

I’ve been waiting a long time for this novel. Ever since the Black Library announced the Horus Heresy series, I’ve been eagerly awaiting coverage of a number of key events: from the initial descent of Horus (in Horus Rising, False Gods and Galaxy in Flames), the war on Mars (Mechanicum), and also the Space Wolves-Thousand Sons conflict. In A Thousand Sons, Graham McNeill offers us the story from the perspective of the eponymous legion (Dan Abnett’s Prospero Burns will give us the perspective of the Space Wolves).

The novel opens well before the events described in the blurb, which I thought strange, but it’s also good as it allows McNeill plenty of space to flesh out the Thousand Sons and the history of the period. To begin with, Magnus’s legion are on the desert-world of Aghoru, investigating an ancient, psychically-charged, malevolent force buried beneath the world.

It takes a little while to get used to the different terminology used by the Thousand Sons (each legion has its own quirky jargon for legion-related things such as hierarchy, structure, practices, traditions, and so forth), but we quickly figure out what is being referred to. The author brings the Thousand Sons to life on the pages, one of the more strange and eccentric Space Marine legions. McNeill manages to balance the clear Egyptian influences that make up a lot of the Thousand Sons’ iconography with the more standard imagery of the Warhammer 40,000 universe as a whole, as well as convey their ‘otherness’ perfectly. The differences are particularly stark when compared with the Space Wolves, one of the more feral legions (think Norsemen and Vikings, only with really, really big guns and swords…). The scenes featuring Magnus and Leman Russ, the Primarch of the Space Wolves, are particularly interesting, as the friction and animosity between the two is palpable, and McNeill is very adept at portraying the tensions through his writing. Indeed, it is always interesting to see the Primarchs brought to life on the pages of this series; so impossible and impressive they are, so legendary, it is a testament to the quality of Graham McNeill (and also Dan Abnett) to have made them such realistic, flawed and three-dimensional characters.

The story is not rushed, as befits the legion’s methodical, calm, scholarly approach to all things. The story is, actually, utterly absorbing, and kept me up well into the night – it’s one of the longer Horus Heresy novels, clocking in at over 500 pages, though this didn’t seem to matter at all – whereas in the past I have been put off by some of the longer Black Library releases, McNeill’s writing, the plot, and the intriguing characters all helped make this easily one of my favourite Sci-Fi novels, period, let alone just Black Library releases.

The novel is enjoyable, though not without one minor flaw. It’s a common sci-fi trope, rather than anything that can be blamed on Graham McNeill alone. It’s also not really that much of an issue, but given that it occurred on page one, it bugged me (and the length that I discuss this should not detract from the other 99% of the novel that I loved). Specifically, it’s the insistence on writing the “science” into science fiction. Take this excerpt from the first page:

“Though its people had no knowledge of geology, the titanic forces of orogenic movement, compressional energies and isostatic uplift, they knew enough to know that the Mountain was too vast, too monumental, to be a natural formation.”

For me, the emphasised text should have been left out – including it doesn’t make me think the author’s done his homework (which, to be fair, he has), but rather that someone was trying to make the novel sound more impressive. McNeill is a great author, who doesn’t need to rely on such devices to make us like his work. This isn’t a text book. Having said all this, however, the decision to use this style does start to make sense – it is perfectly in keeping with the temperament and character of the Astartes of the Thousand Sons, who progress through the ranks by ridding themselves of ego and favouring learning, with intellectual prowess as important as their marshal prowess.

This very minor quibble aside (and, again, it’s true for many sci-fi authors), this is a great addition to the series. We are shown how one of the most loyal and least bloodthirsty legions fell out of favour through suspicion, betrayal, and misunderstanding – unlike the Sons of Horus, who fell through hubris; the Emperor’s Children who fell through decadence and arrogance; and various other reasons that afflicted the other fallen legions. The story of the Thousand Sons is perhaps the most tragic of all the legions.

The Horus Heresy series has been, for the main, a very enjoyable reading experience. The first three novels, for example, proved to be amazing, bringing the age into amazing, violent and chaotic life. A Thousand Sons belongs not only in the upper echelons of the series, but is one of the best novels released by the Black Library thus far.

To sum up: an utterly absorbing, exciting and expertly-crafted novel.

Posted by Civilian Reader at 4:56 PM