I’m going to be writing the occasional post about series I have either been sent to review or already read, in order to highlight some of the other excellent books and authors, which I may otherwise not have the opportunity to read at or near the time of release. For the first post, I’ll be looking at Adrian Tchaikovsky’s very-well-received fantasy series, The Shadows of the Apt, released in the UK by Tor.

[Be aware: there are probably some spoilers in here!]

Tchaikovsky’s series is a pretty great one – he has taken some classic fantasy elements and added a unique (as far as I’m aware) twist and element to his characters and the world, and that is the insect-aspects. Here’s the synopsis of the first book, Empire In Black and Gold, which explains things (specifically, the part in bold):

Seventeen years ago Stenwold witnessed the Wasp Empire storming the city of Myna in a brutal war of conquest. Since then he has preached vainly against this threat in his home city of Collegium, but now the Empire is on the march, with its spies and its armies everywhere, and the Lowlands lie directly in its path. All the while, Stenwold has been training youthful agents to fight the Wasp advance, and the latest recruits include his niece, Che, and his mysterious ward, Tynisa. When his home is violently attacked, he is forced to send them ahead of him and, hotly pursued, they fly by airship to Helleron, the first city in line for the latest Wasp invasion.

Stenwold and Che are Beetle-kinden, one of many human races that take their powers and inspiration each from a totem insect, but he also has allies of many breeds: Mantis, Spider, Ant, with their own particular skills. Foremost is the deadly Mantis-kinden warrior, Tisamon, but other very unlikely allies also join the cause. As things go from bad to worse amid escalating dangers, Stenwold learns that the Wasps intend to use the newly completed railroad between Helleron and Collegium to launch a lightning strike into the heart of the Lowlands. Then he gathers all of his agents to force a final showdown in the engine yard…

It seems, from the few reviews I have read of these novels, that Tchaikovsky has created a world that blends epic fantasy and technology (one reviewer referred to a ‘steampunk’ storyline), drawing on plenty of plots (warfare, intrigue, love, and so forth). Unfortunately, I can’t find the text of the Amazon UK interview the author did last month, as some of his responses would have illuminated what he hopes the series does, what much of it means, and also a useful description of the aspects and what they mean for the world. SFReader had this to say about the kinden:

“Tchaikovsky manages to blend these insect characteristics with human traits convincingly, giving a fresh slant to the inhabitants of his classic tale. The steampunk technology also has some enjoyable ‘insect’ twists.”

While Graeme’s Fantasy Book Review also found the insect aspects to be an interesting and innovative addition:

“the underlying insect cultures do add freshness to the proceedings”

Dragonfly Falling, the second in the series, doesn’t appear to have received quite the glowing reviews of its predecessor, though this is not to say it was received badly; it appears that it suffered, as many sophomore releases do, from gap-filling syndrome. Strange Horizons, which seems to be on the fence about the series, described it as “something you can enjoy without completely losing faith in humanity”.

Here is the synopsis:

Two young companions, Totho and Salma, arrive at Tark to spy on the menacing Wasp army, but are there mistakenly apprehended as enemy agents. By the time they are freed, the city is already under siege. Over in the imperial capital the young emperor, Alvdan, is becoming captivated by a remarkable slave, the vampiric Uctebri, who claims he knows of magic that can grant eternal life.

In Collegium, meanwhile, Stenwold is still trying to persuade the city magnates to take seriously the Wasp Empire’s imminent threat to their survival.

Blood of the Mantis, which according to Graeme’s Fantasy Review “switches from epic battles and sieges to the cut-throat espionage that is going on behind the scenes”, seems to up the ante and improve on writing quality. As Graeme writes,

“While Tchaikovsky writes a decent battle, he really comes into his own with descriptions of covert activity in the marsh town of Jerez and the lake towns of Exalsee.”

Here’s the synopsis for the third instalment:

Driven by the ghosts of the Darakyon, Achaeos has tracked the stolen Shadow Box to the marsh-town of Jerez, but he has only days before the magical box is lost to him forever.

Meanwhile, the forces of the Empire are mustering over winter for their great offensive, gathering their soldiers and perfecting their new weapons. Stenwold and his followers have only a short time to gather what allies they can before the Wasp armies march again, conquering everything in their path. If they cannot throw back the Wasps this spring then the imperial black-and-gold flag will fly over every city in the Lowlands before the year's end.

In Jerez begins a fierce struggle over the Shadow Box, as lake creatures, secret police and renegade magicians compete to take possession. If it falls into the hands of the Wasp Emperor, however, then no amount of fighting will suffice to save the world from his relentless ambition.

The latest volume released thus far, Salute the Dark, which takes a darker turn (obviously, given the title…). Fantasy Book Critic wrote that the book was

“brutal with the characters who are treated mercilessly as befits persons caught in total war, while the atmosphere is tensioned and menacing almost end to end, keeping me to the edge until the final denouements”

From a quick glance at the reviews online, it certainly sounds like Tchaikovsky yet-again surpassed expectations with the fourth instalment of the series. Again, a synopsis:

The vampiric sorcerer Uctebri has at last got his hands on the Shadow Box and can finally begin his dark ritual - a ritual that the Wasp-kinden Emperor believes will grant him immortality - but Uctebri has his own plans both for the Emperor and the Empire.

The massed Wasp armies are on the march, and the spymaster Stenwold must see which of his allies will stand now that the war has finally arrived. This time the Empire will not stop until a black and gold flag waves over Stenwold's own home city of Collegium.

Tisamon the Weaponsmaster is faced with a terrible choice: a path that could lead him to abandon his friends and his daughter, to face degradation and loss, but that might possibly bring him before the Wasp Emperor with a blade in his hand - but is he being driven by Mantis-kinden honour, or manipulated by something more sinister?

Needless to say, my short ‘research’ on the series has really whet my appetite to read it. As I have a couple more review projects in the works, however, I shall have to put it to one side for a month or two. I shall, of course, post a review as soon as I am able to.

The fifth book in the series, Book of Whispers, will be released in 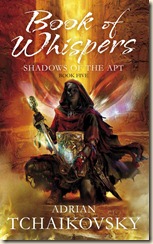 the UK in August 2010, and here’s the synopsis (artwork on the right):

The war with the Wasp Empire has ended in a bitter stalemate, and Collegium has nothing to show for it but wounded veterans. Cheerwell Maker finds herself crippled in ways no doctor can mend, haunted by ghosts of the past that she cannot appease, seeking for meaning in a city that no longer seems like home.

The Empress Seda is regaining control over those imperial cities who refused to bow the knee to her, but she draws her power from something more sinister than mere armies and war machines. Only her consort, the former spymaster Thalric, knows the truth, and now the assassins are coming and he finds his life and his loyalties under threat yet again.

Out past the desert of the Nem the ancient city of Khanaphes awaits them both, with a terrible secret entombed beneath its stones...

Again, a premise to whet the fantasy-lovers appetite. Just to ensure that we’re not ignoring our US and Canadian readers, it should be mentioned that Tchaikovsky’s series is also available in the US. As per usual, there’s different artwork, to work within US fantasy tastes and expectations. For once, I actually quite like the US covers – not as much as the UK editions, but they are still pretty cool (particularly the Blood of the Mantis and Salure the Dark artwork): 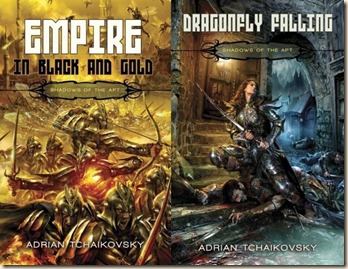 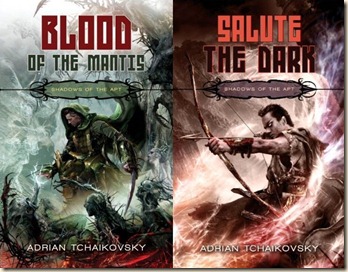 I hope this post has piqued your interest in the series. As mentioned earlier, I shall endeavour to get the series reviewed ASAP. If you have read the books, please feel free to leave your own views and opinions in a comment.

Posted by Civilian Reader at 7:14 PM