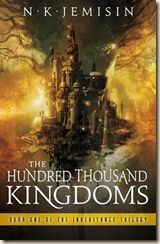 Book One of The Inheritance Trilogy, this is one of 2010’s most hotly-tipped fantasy debuts

Yeine Darr is an outcast from the barbarian north. But when her mother dies under mysterious circumstances, she is summoned to the majestic city of Sky - a palace above the clouds where gods’ and mortals’ lives are intertwined. There, to her shock, Yeine is named one of the potential heirs to the king. But the throne of the Hundred Thousand Kingdoms is not easily won, and Yeine is thrust into a vicious power struggle with a pair of cousins she never knew she had.

As she fights for her life, she draws ever closer to the secrets of her mother's death and her family's bloody history. But it’s not just mortals who have secrets worth hiding and Yeine will learn how perilous the world can be when love and hate, gods and mortals, are bound inseparably.

Set exclusively among the upper strata of life in this world, we follow Yeine’s experiences at Sky, as she navigates the politics and intrigue that plague and animate the high-born Arameri. As a protagonist, I must say I was very happy with Yeine – she wasn’t weak, but neither was she unnecessarily/unbelievably tough for a woman. She was wholly believable, and didn’t break down into tears at the drop of a hat (something that all-too frequently afflicts female characters in all genres of fiction).

The novel is populated by interesting characters, well-drawn by Jemisin’s evocative writing. Scimina, the manipulative, Machiavellian power-seeker; Relad, the weaker of Yeine’s cousins, wanting just to stay alive; Dekarta, the ailing and tricky high lord of the family.

I really enjoyed this novel. The author has created an intriguing world, with twisted politics and complex characters and a detailed, varied society. The interaction between the Arameri and their captive gods is especially interesting, and I was sorry when the novel ended, as I wanted to explore this for longer. Yeine is never able to be sure if they are being truthful or toying with her, doing her bidding or twisting her words and commands to their own ends. The gods’ treatment from those they serve is harsh and demeaning, and Jemisin has managed to convey the anger, anguish and thirst for revenge extremely well in, particularly, Nahadoth, the Nighlord – forced to serve the Arameri, despite their intense hatred for them. There is plenty of intelligent commentary on racial and societal issues, as well as an interesting depiction of what could happen if the basest elements of human nature were allowed to harness the power of the gods.

If I have one complaint about this novel, it is Jemisin’s over-reliance on jumping about in the story. The first couple of chapters are all over the place, chopping and changing – forwards, backwards, description, narrative – making it a rather difficult novel to get sucked into from the start. I understand why she did this, as it does an excellent job of conveying Yeine’s own confusion at being thrust into the world of the Arameri. It’s not too big a deal, but it happens a couple of times through the novel, where Jemisin’s plot has drawn you in, her prose dragging you along, only to disrupt the flow by dropping back to an event that could have easily been properly integrated into the narrative at it’s proper moment. It’s a minor quibble, but it was noticeable enough to warrant mentioning. It’s almost as if Jemisin, at times, suffers from a type of authorial-ADHD…

On the whole, Hundred Thousand Kingdoms is an excellent novel. Considering it is the first in a trilogy, I was surprised by the ending, as it does a good job of closing the story. From the included interview at the back of the book, there are hints of where the story will go (sounds very intriguing), as the next novel will focus on the other, different strata of society. It is difficult to go deeper into the plot without spoiling the story and revelations sprinkled throughout the novel. Needless to say, this is a novel that brilliantly weaves the themes of revenge, patience, justice, love, and power into an original fantasy setting that will hook you until the end, and leave you wanting more. Yes, there is the necessary world-building exposition, but Jemisin is able to make this interesting throughout (particularly the history of the gods), even if it does occasionally interrupt the flow of the story.

A highly recommended read, I would just warn you of the strange and choppy opening chapters. If you make your way through them, however, you will be rewarded with one of the most captivating new voices in fantasy. I eagerly await the next novel in the trilogy.