Two upcoming Harry Dresden books, and the continuation of the Codex Alera from fan-favourite, Jim Butcher.

On March 18th, Orbit will release the paperback edition of Turn Coat, the 11th novel in the Dresden Files series. Emma reviewed the hardback for us earlier in the year (review re-published below), but we thought we’d use the opportunity of the paperback 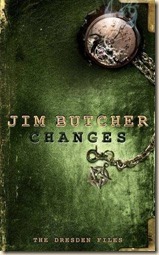 release to bring you a quick update on Butcher’s releases for the near future. The 12th book in the series, Changes will be released in April 2010 (artwork, left). Here’s the blurb:

I answered the phone, no big deal, until I heard the message: “They've taken our daughter.”

Harry Dresden, professional wizard, has never faced anything like this. Arianna Ortega, Red Court vampire, blames Harry for her husband’s death - and she’s out for revenge. So her discovery that Susan Rodriguez had borne Harry a daughter was an unexpected gift. Arianna’s next step was to kidnap the girl and she plans to use her blood in a violent ritual sacrifice designed to kill Harry, Susan and their daughter.

With the White Council of Wizards and the Red Court in a state of detente, Harry finds himself alone except for a handful of allies - resources utterly inadequate to challenging the Red King and his entire vampire Court. With the life of his child at stake, Susan’s humanity hanging in precarious balance and with his own death looming, Dresden must find a new source of strength. In the past, there had always been a line Harry wouldn’t cross, and though dark powers have tempted him time and again, he never gave in.

But then, only his own life was at stake.

In other news, Butcher continues to write his Codex Alera series, which has been well received in both the US and UK. CR reviews of books #1 and #2 can be found here, and here for #3 and #4. The fifth in the series, Princep’s Fury, was released in the UK in December 2009 (review pending), and the sixth book, First Lord’s Fury, will be released in May 2010. Here’s the artwork for them both: 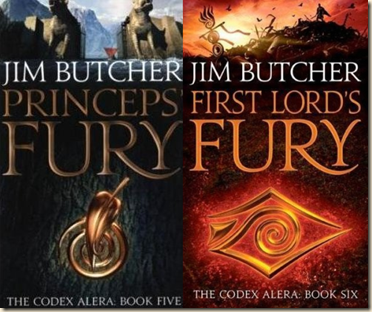 So, a busy year indeed for Mr. Butcher.

All that is left to do is leave you with the review we posted for Turn Coat back in May 2009, tweaked (i.e. new artwork) for the paperback release.

Harry Dresden, professional wizard, has done his best to keep his nose clean where the White Council of Wizards is concerned. Even so, his past misdeeds have cast a constant shadow of suspicion over him in the eyes of the Wardens, those wizards responsible for enforcing the Laws of Magic. Now Dresden finds himself faced with a nightmarish dilemma: Morgan, formerly his chief persecutor among the Wardens, has been wrongly accused of treason against the White Council - and has come to Harry for help. Dresden faces a daunting task: clear Morgan's name while simultaneously hiding him from the Wardens and the supernatural bounty hunters sent to find him, discovering the identity of the true turncoat and, of course, avoiding accusations of treachery of his own. A single mistake may mean that heads - quite literally - will roll. And one of them could be his own…

The latest instalment in the popular Dresden Files is another excellent page-turner from Jim Butcher. Harry is an intensely appealing character: streetwise, powerful, but ultimately flawed. Unlike many other fantasy writers, Butcher takes pains to emphasize magic’s limitations. His characters are not all-powerful, and magic is not a series of bangs and flashes capable of solving any problem. In fact, Harry tends to find that magic gets him into difficult situations far more than it gets him out of them.

Even Butcher’s monsters are human: Thomas, Harry’s vampire half-brother, is a fascinatingly complex take on the usual tortured stereotype, while even Morgan, who until now has seemed more like a machine than a human, turns out to have a heart after all. Throw in some clever detecting, Harry’s trigger-happy apprentice Molly, some seriously scary adversaries, good guys that are just as scary as the bad guys, and a finale that sidesteps the happy ending for one that is both moving and real, and you have another winner in an already strong series.

Butcher reworks traditional folklore and fairy-tale creatures, such as Titania and Queen Mab, and stock characters like vampires and werewolves, and makes them all his own. The dialogue is earthy and witty, the action fast-paced and the writing atmospheric and gripping.

This fantasy is not for the faint-hearted, but if you like genuine crime thrillers with supernatural chills, wisecracking wizards and a real sense of darkness, Turn Coat comes highly recommended.

Turn Coat can be ordered here