“The Left Hand of God”, by Paul Hoffman (Michael Joseph/Penguin) 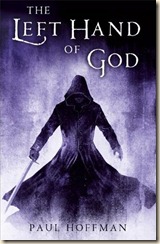 The Sanctuary of the Redeemers on Shotover Scarp is named after a lie; there is no redemption going on there and less sanctuary. The Sanctuary is a vast and desolate religious complex – a place without joy or hope, characterised by hardship and graft. Most of the Sanctuary’s occupants were taken there as boys, and for years have endured the brutal regime of the Lord Redeemers whose cruelty and violence have one singular purpose: to serve in the name of the One True Faith.

Our protagonist, is a (perhaps) fourteen-year-old boy. He has long-forgotten his real name (and age), but now they call him Thomas Cale. He is strange and secretive, witty and charming, violent and profoundly bloody-minded. Cale is so used to the cruelty of the Sanctuary that he seems immune to it. But, one night, he opens the wrong door at the wrong time, and witnesses an act so terrible that he is unable to act in a drastic and fatal way. As a result, he must leave the Sanctuary, or die. His only hope of survival is to escape across the arid Scablands to Memphis, a city the opposite of the Sanctuary in every way: breathtakingly beautiful, infinitely Godless, and deeply corrupt. With the two people he considers friends (or as close to friends as is possible in the harsh world of the Sanctuary), and one other surprising dependent, Cale sets out into a world he knows little about, and has no experience worth speaking of.

But, unfortunately for Cale, the Redeemers want him back at any price. Not because of the secret he now knows, or what he saw, but because of a much more terrifying secret he knows nothing about.

Penguin have gone all-out for the release of Paul Hoffman’s The Left Hand of God, and any reader will quickly discover why. Hoffman’s writing is exceptional – the pace and fluidity of his prose are expertly crafted, and the story and world in which it is set are intriguing. The world is not too dissimilar to our own, with plenty of shared elements. The One True Faith is a brutal mix of Crusader Christianity and perhaps extreme Wahabism, dismissive of women and brutal in its repercussions.

Hoffman’s style is slightly different to others in the genre (he’s also written a number of non-fantasy novels), and this manages to feel like anything but the oft-arduous debut fantasy tomes that are all-too-frequently published these days: Just because you’re a new author, doesn’t mean you have try to write Lord of the Rings again… Hoffman clearly shows with The Left Hand of God that clarity of writing and plotting is far more effective and powerful as a complex new world described in infinite detail. (Though, in truth, the ‘new breed’ of fantasy authors do know what they’re doing – see recommendations at the end of this post.)

Cale is an unusual protagonist – so young, and yet so hardened by his years at the Sanctuary, and the special attention he’s received from the Lord Militant Redeemer, who has been grooming him for something special. Hoffman has created some very interesting and three-dimensional characters, expertly placing them in his world and writing them in a wholly believable way – the portrayal of the boys’ brutal life in the Sanctuary is contrasted nicely with their experiences in Memphis, a city where there is “nothing you can’t get… nothing that can’t be bought or sold, no crime that hasn’t been committed, no food they haven’t eaten, no practice… unpractised.” Their unfamiliarity and new experiences with the outside world and with women are frequently witty and humorous. If you are not swept up by the characters and drawn in by Hoffman’s expert writing, then there’s something very wrong with you.

Some might be put off by the hype, but The Left Hand of God is undoubtedly one of the best debut fantasy novels of the year, and certainly one that is most accessible. Hoffman’s style should make this novel appeal to non-genre fans, too. As the story progresses, Cale and his companions meet ever-more interesting characters (IdrisPukke is especially interesting), as Hoffman unreels his story just enough each chapter to keep you reading. The ending of the novel leaves things open for the future, and I can say without doubt that I am eagerly awaiting the next instalment of the series.

An exceptionally well-written novel, and one that will keep you reading well into the night, this is a highly recommended novel.

The Left Hand of God will be released in the US in June 2010: 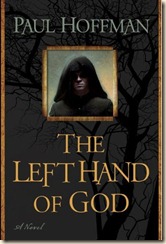