“And Another Thing…”, by Eoin Colfer (Michael Joseph) 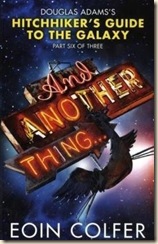 Book Six in the Hitchhikers Guide to the Galaxy, uh, trilogy…

Douglas Adams’ writing was unique, as all good Hitchhiker’s fans know, and his rambling, random, stream-of-consciousness style is not one that can really be improved upon.  Which is why I was very glad that Eoin Colfer did not try to.

And Another Thing... continues the story of the beleaguered Arthur Dent, the last surviving human male in the universe, and his travelling companions Ford Prefect (an alien), his semi-cousin Zaphod Beeblebrox (former Galactic President and current fugitive from Galactic justice), Tricia Macmillan (surviving human female), and Random Dent (the other surviving human female and Arthur and Tricia's resentful teenage daughter).

The plot is reassuringly loony, with the lunatic plot twists and last-minute rescues we expect to see in a Hitchhiker novel. Colfer does an excellent job staying true to the spirit of Douglas Adams, while at the same time preserving his own voice.  The tone isn’t the same as Adams, though this is not a bad thing; the novel is more of an homage than a pastiche, and deserves its place in the trilogy (of 6).

Over-flowing with references to the previous books, And Another Thing… is not a standalone novel. If I must offer a criticism, it is that it refers to the previous (5) instalments of the trilogy a little too often for my taste, though this is perhaps forgivable under the circumstances.

Overall, this is a thoroughly enjoyable read, and any fan of the series should welcome this addition to the Hitchhiker’s universe.

The novel is froody, and you should share and enjoy it. (Read the novels, you’ll get it…)

Series Chronology: The Hitchhikers Guide to the Galaxy; The Restaurant at the End of the Universe; Life, The Universe, & Everything; So Long and Thanks for All the Fish; Mostly Harmless; And Another Thing…

Email ThisBlogThis!Share to TwitterShare to FacebookShare to Pinterest
Labels: And Another Thing, Douglas Adams, Eoin Colfer, Hitchhikers Guide to the Galaxy, Penguin, Review