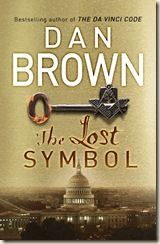 Much has been made of this novel’s release in the press, so allow me just a quick run-down of what this novel is actually about (which is usually forgotten amid all the hype):

Robert Langdon has been called to Washington, D.C., through a ruse put into place by our antagonist, “Mal’akh”. Mal’akh, the overly-tattooed evil mastermind of the piece, has recently managed to become inducted into the highest ranks of the Freemasons, as part of his quest to uncover a hidden mystery and the legendary power that comes with solving it. This secret is protected by the Masons, which explains his obsession with Peter Solomon – one of Langdon’s best friends and mentor. As Mal’akh manipulates Langdon through a series of twisted and convoluted clues throughout Washington D.C., his attention is also drawn to Katherine Solomon’s work in neotics. Eventually, Langdon and Katherine are thrown together to solve the puzzle, and hopefully prevent Mal’akh from achieving his goal. All the while, other factions vie for control of the secret, and Langdon finds himself, once again, put in situations no mild-mannered professor would ever actively seek out…

So, that’s the plot, but is The Lost Symbol any good? Brown has a tendency to polarise the reading public – be it through his questionable use of science and mythology (which, actually, isn’t much different to many other authors, but the Vatican took exception to Brown’s work), or his less-than-stellar gift for prose.

The Da Vinci Code was a fair book, with some good ideas let down by his rather sophomoric writing style (I couldn’t get into Angels & Demons, more due to my mood at the time than any failing on Brown’s behalf). What surprised me the most when it came to reading The Lost Symbol is that it’s both a good book and much better written. The author has managed to speed up his prose, improve the dialogue (there weren’t anywhere near as many clangers this time around), and write another interesting and engaging plot. In fact, this book did exactly what a novel in this genre should do – it manipulated mythology and science, mashing them together to make something new and interesting, it was populated by interesting characters that weren’t totally one-dimensional, and it held my attention.

There is, however, one considerable failing here. Brown seems to have a need to explain everything. Nothing can be left to the readers’ imaginations. Some might say this is because Brown had a particular vision that he wanted to re-create in our minds, which is all well and good when describing something Langdon has to study in order to solve a mystery or puzzle (which Brown does). But, for example, when Mal’akh is just striding through his home, and we’re told he’s walking through a corridor filled with expensive Italian art, why does Brown need to then list a number of obscure pieces of art that (chances are very high) most of his readers won’t know? It feels like showing off, somehow. And consistently referring to a character by his entire title is just annoying (“CIA field agent…” every time!). I can’t believe Brown was paid by the word, but reading this you could easily be forgiven for thinking that. A book that is meant to span only a few hours shouldn’t ever feel drawn-out.

Anyway, those are small niggles, that reduced the impact of the novel by making it far longer than it needed to be. By streamlining the content, pruning back the exposition, The Lost Symbol could well have been nearly perfect – and I wouldn’t have frequently thought “get on with it!” while reading.

Many people will roll their eyes at the prospect of anyone enjoying this novel. Many will outright refuse to even contemplate reading it. Some might read it, enjoy it, but not admit it to their friends and peers. These people are all missing out. Brown’s novels do exactly what they are supposed to do: entertain. The overdone and exaggerated reactions to Da Vinci Code are addressed in passing at the start of Lost Symbol, as Langdon comments on his surprise at the ferocious response to his work: “Scandal wasn’t my intention”, he tells a fan.

I enjoyed this novel, and if you have even a passing interest in novels that delve into science and mysticism, then The Lost Symbol will likely be right up your street.

Posted by Civilian Reader at 1:52 PM