Mr Newton revealed on his website today the latest version of the artwork for the third novel in his Legends of the Red Sun series: The Book of Transformations. There was some… uh, disagreement over the quality of the previous two designs (which I’ve included below, as well).

I can say that the latest design is much better, and generally a very eye-catching piece of artwork. Here it is in its entirety (including blurbs from other author types), and it should en-biggen when you click on it: 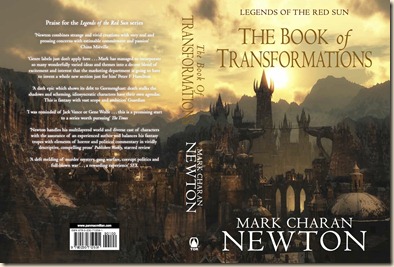 And now a cropped version of what would be the front cover: 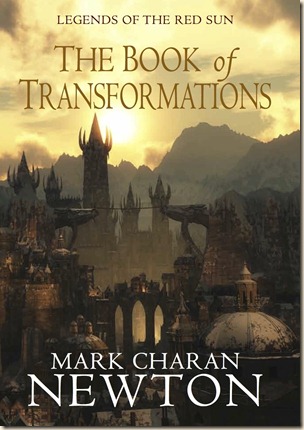 For those interested in seeing the, uh, less admired proposals, here they are: 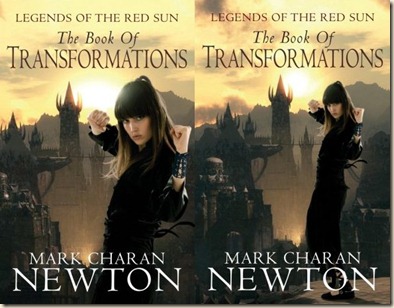 As I’m sure most people would agree, these aren’t quite so good. We’re just not sure what the chick’s actually up to. Bit of an awkward pose, not sure who she is, or what she’s… doing there. The city in the background is still awesome, so I’m glad they made that more the focus of the (latest) proposed cover.

Finally, here’s the blurb for The Book of Transformations:

A new and corrupt Emperor seeks to rebuild the ancient structures of Villjamur to give the people of the city hope in the face of great upheaval and an oppressing ice age. But when a stranger called Shalev arrives, empowering a militant underground movement, crime and terror becomes rampant.

The Inquisition is always one step behind, and military resources are spread thinly across the Empire. So Emperor Urtica calls upon cultists to help construct a group to eliminate those involved with the uprising, and calm the populace – the Villjamur Knights. But there’s more to Knights than just phenomenal skills and abilities – each have a secret that, if exposed, could destroy everything they represent.

Investigator Fulcrom of the Villjamur Inquisition is given the unenviable task of managing the Knights, but his own skills are tested when a mysterious priest, who has travelled from beyond the fringes of the Empire, seeks his help. The priest’s existence threatens the church, and his quest promises to unravel the fabric of the world. And in a distant corner of the Empire, the enigmatic cultist Dartun Súr steps back into this world, having witnessed horrors beyond his imagination. Broken, altered, he and the remnants of his order are heading back to Villjamur.

And all eyes turn to the Sanctuary City, for Villjamur’s ancient legends are about to be shattered…

Now, if I could only make time to read City of Ruin, I’d be fully prepared for book three. I’ll read and review it soon. I promise.