“The Fury”, by Jason Pinter (MIRA) 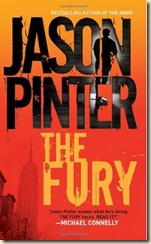 Accosted by an unknown dishevelled junkie outside his office, Henry Parker is surprised when he is called to the city morgue to identify the murdered remains of same junkie – who happens to be his brother. Only problem is, Henry doesn’t have a brother, and never has as far as he’s known. The brother he never knew has been shot execution-style in a hole of an apartment in New York’s Alphabet City, his body wasted from hunger and drugs. Stephen Gaines was a man with whom Henry shared nothing except a father; a father who kept the secret from him up until Stephen’s death.

After confronting his father, who is promptly arrested for the murder, Henry finds himself sucked into a personal mission to discover who killed Stephen, and why. As his investigation leads down into the underbelly of New York and the drug world, he sets out on a dangerous path to hunt down a drug lord who may or may not be an urban myth.

With The Fury, Pinter’s ability to craft a fast-paced thriller, filled with emotion (and only just skirting the edge of schmaltz) and interesting twists and turns, remains firmly intact. There are, no doubt, many who might dismiss the Henry Parker series as throw-away crime fiction, but Pinter is better than that. His novels, set in New York and the world of journalism, are gripping and thrilling tales of a young, idealistic journalist with the worst luck in the world – or the best, given his profession and his front-line seat to so many front-page scoops. Pinter’s characters remain interesting and far from one-dimensional. Henry’s relationship with Amanda is on the mend, and his dealings with his father feel genuine and far from the teen-angst they could have been if written by another author.

There is real continuity within this series, as Pinter’s characters develop and grow with each passing novel. The Fury will leave you eager for the next instalment of Parker’s exploits. Pinter has written another novel that will entertain, surprise, and keep you guessing until the end.

This is a highly recommended series, and one I’ve been hooked to since its first instalment, The Mark.

[The Hunted, an ebook novella, and The Darkness are now available in the US, and will be reviewed here soon.]

Possibly the UK Cover, to be released in August 2010:

Posted by Civilian Reader at 5:30 AM