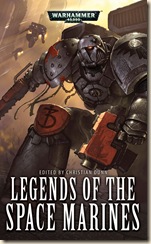 This anthologies isn’t out until May 2010, but as one of the short stories is now available as a taster, I thought I’d include it in a mini-review/-preview post. Here’s the only blurb I’ve been able to find for the book:

Space Marines and their evil counterparts, the Traitor Marines, epitomise the war-torn. Warhammer 40,000 universe. This short story collection focuses entirely on these superhuman warrior, telling high-action tales of heroism and savagery. Combining the talents of Black Library’s favourite authors such as Mike Lee and Nick Kyme with hot new talent, this collection is not to be missed

So, here’s the review of the preview story…

Twelve Wolves is a tale of the Space Wolves – a wild and ferocious legion of the Space Marines. More akin to the Norsemen than the US Marines, the story takes the form of an older member of the legion (not actually a Space Marine, but some other legion member) telling a crowd of younger marines a parable, in the form of the tale of a historical battle – specifically, during the Age of Apostasy, when the Imperial clergy tried to take power for themselves. The Space Wolves’ homeworld of Fenris is under siege, and this is the story of two marines – the elder Daegalan, and the newly-recruited Hrothgar – and their part in the defence of the world and, specifically, the Space Wolf stronghold, the Fang.

I must say I liked the style and format of the story, and Counter’s writing is assured and fluid, and does give the tale the feel of a proper Norse saga (albeit a rather short one). For those familiar with the mythology of the universe, this will be a great, quick read. Counter manages to simultaneously portray the impetuous ferocity of the legion as well as the analytical, strategic elder marine’s more measured approach to combat.

If the rest of the stories in the anthology are as good or better, Legends of the Space Marines should be a pretty decent read. (If it has a story by Dan Abnett, all the better, but I’m not sure that it does.)

You can download Twelve Wolves, for free and in a variety of formats, from Black Library’s website.

[As an aside, I downloaded the ePub version: Never one to pass up the opportunity to discuss them, it would be great if Black Library started releasing their books as eBooks.]

Posted by Civilian Reader at 5:27 AM