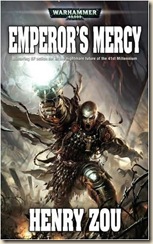 Behind enemy lines, Inquisitor Roth attempts to thwart the machinations of the Archenemy

Inquisitor Obadiah Roth and his band of henchman have been sent to the worlds of the Medina Corridor to investigate the motives of the invading Ironclads – an armada of Chaos raiders and traitors. Roth’s mission is to uncover the location and potential of a set of ancient artefacts, known as the Old Kings of Medina, infiltrating a number of worlds subjugated by Chaos. Meanwhile, the Ironclads have invaded the subsector in search of these artefacts, naturally ensuring that the Inquisition will do anything and everything to deny them this goal – even though Roth and his team know nothing of the whereabouts or characteristics of the artefacts. With the Ironclads' indomitable army crushing all before it, interference from the Lord High Marshall of the Medina fleet, and internal Imperial politics, will Roth be able to find the artefacts in time to prevent a cataclysm from engulfing the Medina worlds?

Henry Zou is one of the Black Library’s most-hotly-anticipated new authors, and this is his first novel for the publisher. Drawing on some of the standard tropes of Warhammer 40,000 novels, the action in plentiful and detailed, and the background politics and intrigue well-constructed. It is, however, a somewhat frustrating read.

Zou has an incredible imagination and, coupled with his knowledge of the military and combat (he’s in the New Zealand army) has created a series that is far more developed and original than most, while still faithfully set in the familiar WH40k. The worlds Roth is despatched to are well-formed, intriguing locales for his characters to explore and survive – Middle Eastern, Asian and other influences are on display, but with Zou’s original twist and merging of them all to create something truly unique and special. Roth and his team are an interesting, diverse selection of characters – huntsman Bastiel Silverstein, Roth’s oldest companion; untested fellow Inquisitor Celeminé, far deadlier than she appears; and Roth’s young adjutant, Captain Pradal. The Ironclads are a gruesome, brutal enemy for our protagonists, and they are well portrayed in Zou’s writing. This is also true of the action and battle scenes and sequences, which are well-paced and authentically written. The premise of the story made me want to snap this up as soon as I first read about it, with expectations of more in the vein of Dan Abnett’s Ravenor and Eisenhorn series – i.e. with a focus on individual Inquisitiors and their missions.

Why, then, is Emperor’s Mercy a frustrating read? Well, for a couple of reasons. Firstly, the author’s obsessive attention to detail makes the novel feel over-written, as he provides more than necessary (too much) to set his scenes. Zou seems to want the reader to see exactly what he saw in his mind when writing – an admirable goal, but an unrealistic one, which has this negative side-effect. This is not necessarily always a bad thing, but there are times when he lets the exposition run away from him, and it’s clear that his editor decided that streamlining of Zou’s prose was optional – sometimes, we don’t need everything described (especially weaponry). He would have done a better job if he’d reined himself in a bit, increasing the pace and in-turn increasing the tension and intensity. The dialogue, too, can sometimes feel a bit off. The second issue is, ironically considering the first, that Inquisitor Roth is never fully fleshed out in the novel. I assume we’ll get a little more character development over the course of the series (even though the next book, Flesh & Iron – out April 2010, is a prequel).

Despite these two points, Henry Zou shows a huge amount of promise to rise to the upper ranks of Black Library’s roster, maybe just behind Dan Abnett and William King – the best authors writing in the Warhammer and Warhammer 40,000 universes (Nathan Long is getting a lot better, too). As a debut, Emperor’s Mercy shows a gifted author finding his feet, and I have no doubt that, over the course of his writing career, he will improve in leaps and bounds – if he can reign in the tautology, and keep his inventive premises, there’s no reason he shouldn’t become an essential read for wider sci-fi fans, too.

This review has a more-negative tone than intended: the novel contains quite a few flashes of genius (be they plot- or style-related), but there’s definitely a little way to go before Zou’s writing can really be considered ‘excellent’ or, given a little more time, ‘exceptional’.

An great new voice on the publisher’s roster, Zou’s writing will breathe some new life into the Warhammer 40,000 universe. A very promising debut, Zou is one an author to watch.

Posted by Civilian Reader at 4:44 PM