President Obama in Comics: An Interesting and Peculiar Selection from the Sub-Sub-Genre…

President Obama has already featured in a number of comic books: be they comic/graphic adaptations of his life story, campaign-biography style one-shots, or cameos in established series comic series (such as Marc Guggenheim’s Avenging Spider-Man, below). Few presidents have excited the imaginations of such a broad segment of the American public and creative industries as has the 44th president. As someone who is interested in the cross-over areas of politics, media and pop culture, these past five years have been a fertile time for alternative presidential coverage. 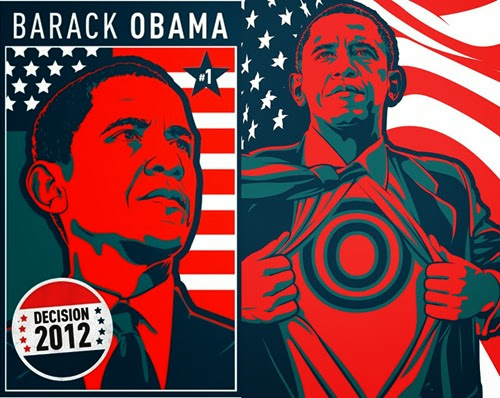 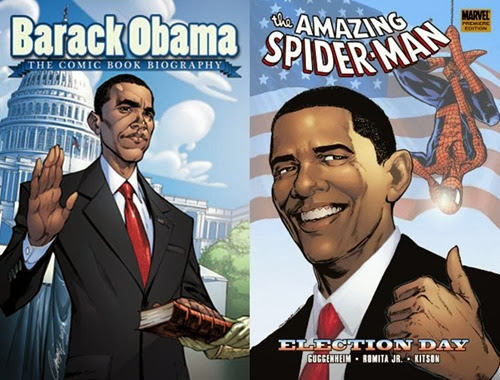 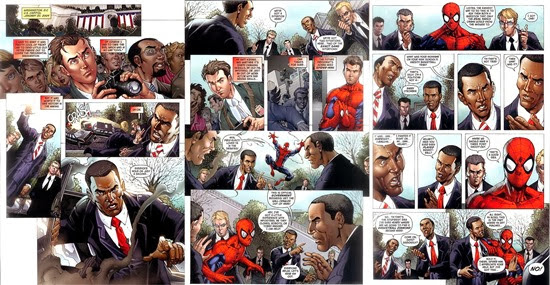 Most recently, IDW Comics published The Other Dead (currently at issue #4), which is elevator-pitched as “Zombie Animals Devour the World”. The longer-form description sounds like a familiar, fauna-twist on The Walking Dead:

“As a weary community braces for the onslaught of an incoming superstorm, an even more insidious force grows right under their noses! When a sudden outbreak turns every animal in sight into raging, flesh-craving monsters, a colorful cast of characters will have no choice but to contend with THE OTHER DEAD!”

But, as the series unfolds, and the infection spreads across America, a diverse cast of characters – “ranging from a demon-obsessed death metal band to a paranoid survivalist to the President of the United States himself” – will try to contend with and combat “the most unpredictable zombie outbreak in history.” I don’t have any interior page previews featuring the president, but of the 11 cover variants that have thus-far been revealed for the first four issues, there are two (#1 and #4) that feature President Obama prominently, toting some serious firepower: 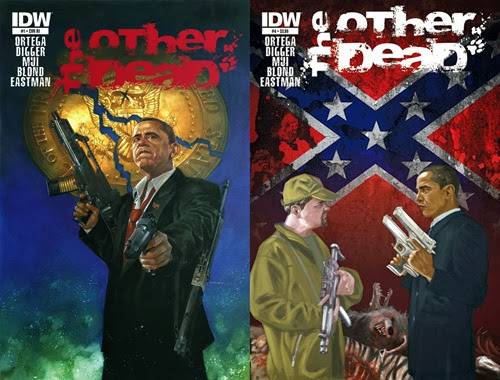 The Other Dead issues #1-4 are out now, published by IDW Comics. The series is written by Joshua Ortega and Digger T. Mesch, cover artwork is by Kevin Eastman, interior artwork is by Qing Ping Mui, and colouring by Blond.

Posted by Civilian Reader at 7:38 PM