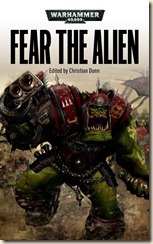 Here come the aliens! A selection of stories dealing with the future alien menace faced by Man in the Grim Far Future

The Imperium of Man has many enemies among the stars, but none are reviled so much as the alien. Dangerous races seek to destroy humanity wherever they turn –the brutish Orks, the ravening hordes of the Tyranid, the unrelenting Necrons and the mysterious forces of the tau and the Eldar. Across the universe, humanity and their defenders, the Space Marines, seek to eradicate these xenos threats. Yet all they can hope for is another day of survival – for to stand against the alien is to enter an unending war...

Nothing characterises the Warhammer 40,000 universe more than the struggle between the Imperium of man and the hordes of aliens massing at and within its borders. In this anthology, we have ten short stories that focus on the theme of “alien” – whether in the guise of the truly alien xenos species that are a constant threat to mankind, or a general “otherness”, these stories all have something original to add to the existing literature set in the 40k universe.

All the stories are quite varied and different, so I’ve dealt with them individually. So, without further ado…

This was a fun short story, like a quick murder-mystery, with the feel of Bones if it was set in 40k universe. Drusher is a poor, put-upon academic, called in to help solve a string of brutal and messy deaths.

There’s a rather gentle pace to the story, and not exactly what you’d expect from an opening story to such an anthology, so maybe it should have been located later in the book? Still, it’s very well written and enjoyable, with well-constructed characters. I’d be interested in reading more stories (short or otherwise) about this character, though I’m not sure how it would be spun out to novel-length. A slow-paced opener, it’s definitely worth a read.

Tyranids, the most alien enemies to be feared… Catmos, an Imperial Guard medicae, finds himself on the frontlines, as endless swarms of alien killers hurl themselves at the Imperial positions. Catmos is left to deal with the leftovers, which when the Tyranids are involved, is sadly plentiful.

McKenna’s description of the tyranid beasties evokes a particularly frightening picture, and we get a good sense of the fear and despair the Guardsmen must feel from the seemingly unending tide of alien, living killing machines. It’s a little predictable, but then when dealing with these aliens, that’s sort of a given…

A good story, from an author I’ve never read before.

This story is a tie-in Kyme’s his Salamander series (which I sadly have yet to read). I rather enjoyed “Prometheus Requiem” – it’s one of the better novelizations of what I imagine a game of Space Hulk would feel like if narrated. Kyme’s got a good eye for atmospherics and putting them into punchy prose, and creates a real sense of menace and tension for the Marines on the hulk that I thought worked rather well.

The team of Space Marines is taken from a number of squads, it seems, and they don’t all get on very well. Makes for a tense working relationship, as well as some unhelpful baiting and contest between the battle brothers. It doesn’t help that many of them seem to be carrying some pretty heavy emotional baggage. I’d certainly be interested in trying his longer fiction, featuring the same Legion, if only to figure out a little bit more of what was mentioned in this story – there seemed to be a lot more going on than I caught (mainly in those moments when the ship’s warp-taint effects the Marines), based on what happened in the Salamander novels.

A solid story, and well written. It ties in with Dembski-Bowden’s contribution to the anthology, too. (See below.)

This is a tale about a delightfully demented Dark Eldar lord (or “Archon”), trying to come to grips with and understand his love for a newly arrived lady. It’s an interesting short story, one that presents a totally different approach to love and relationships (the Dark Eldar understanding of ‘love’ is based around possession and domination), in the perspective of a race that welcomes pain and agony, prioritising dominance and ownership above all else. It’s pretty well written, too. The courting rituals of the Dark Eldar are not for the faint of heart, the social mores very different from our own high-society traditions. Malwrack’s obsession leads him down a dangerous path, as he keeps trying to win her attentions.

It’s Jane Austen, if she wrote on crack and was into domination... Given his good writing style and the demented characters he can write, I’d certainly be interested in reading more from Campbell, whatever length.

After a brief intro written from the perspective of an Imperial Guardsman officer planning his defences, this story switches to the ork point of view. Thankfully (some might say mercifully), the dialogue is not scripted; this could have become tedious and irritating very quickly. Instead, Werner manages to portray the ork kommandos’ actions, orders, and mindset brilliantly in the third person and internally.

Basically, for orks, it’s all about being and acting tough and, of course, fighting. A lot. For the orks’ smaller cousins, the gretchin, it’s about survival and not taking more beatings than absolutely necessary.

It’s a good, very short story, about the folly of man’s propensity for projecting one’s own beliefs, temperament and psyche onto something utterly alien. (Interestingly, it alludes to, in a very minor fashion, an enduring dilemma in the study of international relations.) The story manages to raise a few smiles without detracting from the moment (including, for example, a very brief explanations of why they were all wearing red boots – as everyone knows, red ones are faster). Simple touches like this will appeal to those familiar with Warhammer 40,000 orks, but also won’t lose newcomers to the universe and setting.

An enginseer, in his mechanical, calm and logical manner, comes into contact with xenos for the very first time. On his own, Kaspel has to expel an invading band of Dark Eldar, lest they cause any more damage to or violations of the Imperial cruiser and its technology that he has been tasked to repair.

It’s a strange perspective – the clinical enginseer, peeved more at the alien technology than the actual fact that they’re trying to steal the ship, or here in the first place. While the Dark Eldar are, of course, sado-masochistic aliens, Kaspel’s perspective offers another ‘otherness’, as his approach is almost too calculating and clinical.

An interesting story, from an author I had not read before.

I must sadly admit to being rather confused by this one. I wouldn’t even feel confident saying exactly what it was about. After finishing it, things become a little easier to understand, but Farrer’s approach to the enigmatic Eldar Harlequins matches the subjects themselves: ethereal and somewhat incomprehensible.

One of the Harlequins, it seems, possibly a psychic one, is struggling as its dreams begin to bleed into reality. I think if I could remember more of the background info on the Harlequins, this would be easier understood – I remember reading something about the dances and rituals these warriors perform to decide who plays which role in their troubadour-approach to war. It’s a little weird, anyway.

It’s a long story, one of the longer in the anthology, and perhaps this wasn’t the wisest move. It’s certainly well written, and Farrer’s adept at working Jann’s confusion into the narrative atmosphere. The style is very different from the Farrer’s better-known Shira Calpurnia novels which I’m more familiar with, so at least it showcases what the author can do.

Gesar, a Raven Guard Astartes (“a study in patience and potential violence”), is saddled with an Imperial Guardsman sniper, Tam. They have become separated from their respective forces, and are trying to find their way back. At the same time, they are up against the Japanese-/Oriental-styled, quasi-communist Tau and their allied corps of animalistic Kroot mercenaries and human traitors.

It made a nice change to have the Raven Guard as the featured Space Marines – it’s not a legion I’ve read much about (I would still like to know more about the original twenty legions, their primarchs and traits). There are two levels of alien in this story: first, and most obviously, Tam experiences the considerable ‘otherness’ of the Tau forces (and he really does experience it at the end); secondly, there is also his Raven Guard companion, so different physically and in temperament, that it would be almost impossible not to consider him ‘alien’.

The story is well-crafted and builds to a fine ending. Gilmer’s writing is great, reminiscent of thriller writers as much as sci-fi authors. Would be interesting to see what he could do with something novel-length.

I’ve really missed out by not yet reading Soul Hunter… In this story, a group of Night Lords Chaos Space Marines investigate a massive Space Hulk – it is the same as that featured in Kyme’s story (above). They are on a salvage mission, when they come face-to-face with the slumbering horde of Genestealers and the loyalist Salamander Space Marines.

The characters are quite varied – some disciplined and focused, others wild and addicted to the hunt. The Raptor squad in particular (Bleeding Eyes) were interesting, less human than the others, having become more animalistic as the decades have gone by. Even though they are battling genestealers (along with tyranids, the most alien creatures in WH40k universe), the Chaos Marines are themselves pretty alien.

Bowden’s writing is great, and the characters are certainly interesting and well-crafted. In just a short space, he is able to make us care for these characters, and despite their ‘traitor’ nature and Chaos affiliation, they are far from two-dimensional ‘baddies’. Talos is a particularly interesting character, breaking with the standard impression of what a Chaos leader might be like.

I really liked this story, especially because it tied into another in the volume. I would say this was probably my favourite in the book, alongside Abnett’s (though they’re quite different from each other). “The Core” just works on every level. Excellent story.

An ambitious scion of an Imperial Rogue Trader clan stumbles across a Necron tomb, and decides to rob it.

The story has some classic tomb raiding elements to it, complete with hubristic protagonists, and an unerring (almost single-minded), all-too-human avarice (particularly at the end). The story’s pretty good, and quite atmospheric. There’s not much characterisation, but the members of Brielle's team are realistic and dedicated, and Hoare is certainly able to convey the tension and underlying, menacing atmosphere of the tomb.

Perhaps not the best close to the anthology, after the previous story, but it’s certainly a good addition and well worth reading.

All in all, this was an interesting anthology, with a couple of great stories. For me, it served as an introduction to some new authors writing for Black Library; as well as an intro to some more established authors I had yet to try out (Dembski-Bowden being the most notable and unforgivable oversight on my part). And, as always, it’s nice to read more work by Dan Abnett, C.L. Werner, and Matthew Farrer.

While not the best anthology they’ve ever published, this is still yet another solid release from the Black Library. These ten tales are great fillers for the time between novels, and also great vignettes set in the grim, war-dominated future. For those new to the setting, Fear the Alien is a great introduction to the species that populate the universe and how they effect the continued existence of mankind.

Good fun and varied, this is a recommended sci-fi anthology full of action and interesting characters.

Posted by Civilian Reader at 10:53 AM