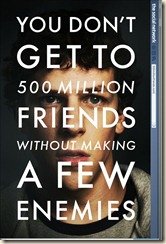 This review was originally posted quite a while back on my non-fiction blog, here. I decided to re-post it because of the high-profile movie adaptation (The Social Network) that is released very soon (October 1st in the USA). The script was also written by my favourite TV/Movie Screenwriter, Aaron Sorkin (West Wing, Studio 60 on the Sunset Strip, Charlie Wilson’s War), so I also wanted to do my bit to increase awareness even just a little bit.

Giving us the history of an internet tool so many millions of people have come to rely on (or just become addicted to), in a manner that is entertaining and more-or-less without bias, Mezrich has written a book worthy of out attention, whether you use Facebook or not.

Here’s what I had to say after reading the book (with just a few tweaks and additions, and the movie trailer at the end)… 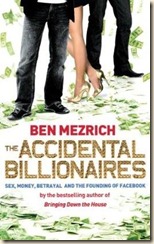 They just wanted to meet girls…

At Harvard, social acceptance and success with the opposite sex had to be applied for. In the absence of family money or innate charisma, misfit and maths prodigy Eduardo Saverin deamed of joining one of Harvard’s elite Final clubs. His best friend, painfully shy computer genius Mark Zuckerberg, turned instead to his natural talents, hacking into the university’s computer system to create a rateable database of every female student on campus.

Narrowly escaping expulsion after 80% of Harvard’s population voted in just two hours, crashing the entire computer system, Mark and Eduardo together refocused the site into something less controversial – ‘The Facebook’ – which spread like wildfire across campuses around the country. Within months, hundreds of thousands of college kids had signed up.

Suddenly Eduardo and Mark were getting nods not just from the female population, but from venture capitalists too. It was then, amidst the dizzying levels of cash and the promise of unbelievable power, that the first cracks in their friendship started to appear, and what began as a simple argument spiralled into an out-and-out war. The great irony is that Facebook succeeded by bringing people together – but its very success tore two best friends apart.

In Accidental Billionaires, Mezrich (author of Bringing Down the House) tells us the story of Facebook – from its creation and first steps all the way to world domination. It is the story of two guys at Harvard trying to improve their social standing, to meet girls – one, Eduardo Saverin, through “punching” a Final Club; the other, Mark Zuckerberg, by making a “killer app” to impress others.

From the first Harvard-based website Zuckerberg wrote – “Facemash”, a late-night reaction to a girl dumping him – to his limited work on a soon-to-be rival website, “HarvardConnection”, and on to Facebook’s incredible rise in the internet world, the story takes us through every step of Zuckerberg and Saverin’s journey – the highs, the lows, the betrayals and the attacks. Saverin had the business savvy Zuckerberg needed to get the site launched, and was arguably his best friend at Harvard. The story is also a refutation, in this age, of Saverin’s initial belief that

“You didn’t get popular by writing computer code. A computer program couldn’t get you laid”

His partnership with Zuckerberg would change both of their lives forever, and make them far more popular and famous than they could have imagined.

Facemash had the unfortunate effect of crashing the university servers as 80% of Harvard students voted on who they believed was the hottest girl on campus (something that didn’t exactly endear its creator to the administration or campus feminists). Narrowly avoiding expulsion, Zuckerberg was approached by Divya Narendra and identical rowing twins, Tyler and Cameron Winklevoss, to help them with their own networking site (meant to make hooking up more time-efficient). Zuckerberg agreed, but never really did any work for them, instead focusing on his own site, “thefacebook.com”. The Winklevoss twins and Divya saw thefacebook as a theft of their idea, and they eventually filed a lawsuit against Zuckerberg, obviously not succeeding in their aim of shutting Facebook down, which instead spread like wildfire through campuses across America, and then beyond.

The author explains how, to Mark, rather than the potential for social betterment,

“it’s likely that the cool thing [about Facebook] was the math that was going to go into it – the computer science of the task, the code at the heart of the Web-site idea.”

Zuckerberg comes across as a strange character – a true hacker-geek, somewhat disinterested in money, more interested in the world online than out in the real world. His character develops and changes as thefacebook grows – at times he comes across as cold, even ruthless when countering accusations of plagiarism in the site; other times he appears disconnected from the world; at other times he seems mischievous. His is clearly a personality that is difficult to nail down or decipher – bizarre for the person who has created the ultimate online socialising tool. Equally ironic, and tragic, is the fact that, while their creation brought hundreds of thousands of people closer, their rapid and unprecedented success ultimately tore their friendship apart as a simple disagreement spiralled out of control into out-and-out war.

This narrative account (which the author admits to taking a pinch of authorial license to create a proper chronological flow) was drawn from hundreds of interviews, emails and conversations with some of those involved – most remain anonymous, though Eduardo Saverin and Tyler Winklevoss seem to have been considerable and loquacious sources, while Zuckerberg declined to be interviewed at all for the book. The absence of Zuckerberg’s input is noticeable, and there’s no doubt that the book would have benefited from his perspective – especially with regards to the lawsuits, personal relationships, and those times when he was away from his colleagues and friends. Despite the bad blood between the Facebook founders, Saverin’s portrayal of Zuckerberg remains largely positive, or at least neutral, throughout the book – which is a good testament to Saverin’s character.

As well as the story of Facebook, Accidental Billionaires gives the reader an interesting window into Ivy League campus life and also the world of Harvard’s Final Clubs – the exclusive university fraternities, membership to which can change anyone’s life, both at college and after. With names like Phoenix and Porcellian, it’s a little difficult to take them seriously at first glance. But, when you consider that the latter (sometimes referred to as “The Porc”) counts President Teddy Roosevelt and a considerable number of highly influential US politicians from the late 19th and early 20th Centuries as members, it’s clear that they’re a social force to be reckoned with.

Mezrich shows how, in many ways, Facebook is just an online distillation of what defines college life: sex. Regardless of your social standing, the author posits, there is nothing that can’t be linked with this drive.

“Even at Harvard, the most exclusive school in the world, it was all really about sex. Getting it, or not getting it.”

Thefacebook would have an “undercurrent of sex”, while not being as explicit about it as other, existing networking sites (e.g. Match.com). The website’s “Looking For”, “Relationship Status” and “Interested Features” were basically “the résumé items that were at the heart of [the] college experience”. While the site has evolved into something much more varied and… well, perhaps ‘high-brow’ is not the word, but it’s certainly about more than just sex. At some universities and colleges, it remains the principle tool for social-climbing, ramping up the number of “friends” you have, making connections, and so forth. But now it is so much more – it’s become a place for reconnecting with long-lost or forgotten school friends, getting to know new friends, Facebook stalking, and sharing interesting or amusing internet content (editorial cartoons, articles, music videos, and let’s not forget book reviews, of course). Saverin and Zuckerberg gave birth to an internet juggernaut, one that keeps evolving and spreading, and truly changed the way millions of people live their lives and interact with others – whether this is a good or bad development is up to you to decide.

Overall, Accidental Billionaires is a very well written, engaging book. Mezrich’s style is very accessible, conversational and manages to make the story of a website actually quite gripping. The book is a very fast read, Mezrich’s writing just pulls you along, with frequently funny and illuminating passages and anecdotes. Accidental Billionaires is as addictively readable as its subject matter is usable, and is one of the most intriguing and enjoyable non-fiction books I’ve read in a long time.

Highly recommended to all.

By the Same Author: Bringing Down the House, Ugly Americans, Busting Vegas, Rigged (and others)