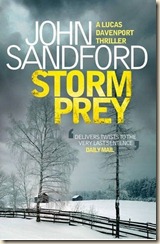 There’s a storm brewing... Very early, 4:45am on a bitterly cold Minnesota morning, three big men burst through the door of a hospital pharmacy, duct-tape the hands, feet, mouth and eyes of two pharmacy workers, and clean the place out. But then things swiftly go bad, one of the workers dies, and the robbers hustle out to their truck — and find themselves for just one second face-to-face with a blond woman who’s just driven into the garage: Weather Karkinnen, surgeon, and wife of top Minnesota investigator, Lucas Davenport.

Did she see enough? Can she identify the robbers?

Gnawing it over later, it seems to them there is only one thing they can do: Find out who she is, and eliminate the only possible witness to their crime...

Long-time readers of the site will know how much I like Sandford’s work. Having read all of the Prey novels, as well as Sandford’s much-loved, short series of Kidd novels, each new novel from the author is usually an exciting and important event on my calendar. For some reason, however, Storm Prey just kept getting pushed back, as other things came in that happened to appeal to my mood at the time. Now that I’ve got these things out of the way, Storm Prey is the first in a string of thriller reviews I’ll be doing for the site (including Sandford’s other two most recent releases, Heat Lightning and Rough Country).

Thankfully, Storm Prey was  a great read, and it was worth the wait.

At the start of the novel, Weather is introduced as a member of an important, ground-breaking surgery to separate twins conjoined at the skull. It is difficult, delicate, and dangerous work, but the media are interested and the stakes are high. The explanation of the procedure and medical detail at the beginning was a bit long, even if it was interesting, and as the story progresses we see how the surgery forms an important backdrop for the novel. It felt a little like padding at times, but this isn’t really a problem, as Sandford keeps the pace up throughout.

It was nice that Weather Karkinnen, Lucas’s wife, takes a more central role in a Prey novel after so long being in the background, playing the role of an emotional support mechanism for Lucas. In Storm Prey, Lucas is there to offer her support, so it’s a nice role-reversal. One thing that struck me, however, was that Lucas didn’t seem to feature so much in the story. One of the best things about the Prey novels is Lucas’s process of solving crimes – often internal mulling, but also unconventional investigative methods. This time around, they didn’t seem to form enough of the novel, for me.

For Storm Prey, there are a few more perspectives the novel is written from: two ‘bad guy’ factions, made up of four perspectives; Weather’s perspective; and also a little through Virgil’s eyes. So, it was noticeable how little written was told from Lucas’s point of view. Given that Sandford’s parallel series seems to be taking off, featuring Virgil as the main protagonist (book four, Bad Blood, is released this September in the USA), I wonder if the author’s getting prepared to retire the Prey series? I hope not, but equally after 20+ books, I wouldn’t be surprised.

Sandford’s classic, dry humour is present, this time commenting on American society as a whole, and the “perils of negotiating a capitalist economy”. I still love the rapport between the members of Lucas’s team; they form a real band of brothers, which makes a nice change from the lone-cop or partner/buddy-cop formula of many cop/crime thrillers.

The story initially seemed a little thin; that it might not really be that fulfilling (not to mention threatening to finish 100 pages in, before the proverbial shit hit the fan), but Sandford really makes it work, delving into the world of biker gangs, the US hospital system, drug addiction, and also the relationships between people with shared experiences and brought together under strange circumstances. A weird mix, but they made for a good story.

Basically, the group who robbed the hospital succumb to extreme paranoia; they weren’t close before the job, and when it goes wrong, suspicions go into overdrive. Some unexpected alliances form, not to mention a strangely touching friendship between Barakat (Lebanese medical resident and dope fiend) and Cappy (a cold-blooded, very young killer), which could have been the beginning of a beautiful bromance.

The plot meanders a little more than usual, and it wasn’t quite as fast-paced and exciting as previous Prey novels. But, that being said, I was still eager to read it all, and was annoyed whenever I was interrupted – I ended up snatching any opportunity to read, even if I only had time to read two pages.

Sandford remains one of the best thriller writers working today, and I eagerly look forward to reading everything and anything else he writes.

Recommended for all thriller fans.