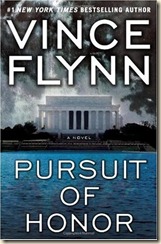 Rapp faces terrorists loose in the US, a CIA mole, and a hostile political climate

Pursuit of Honor picks up six days after the events that brought Extreme Measures to a close: A series of explosions has ripped through Washington, D.C., targeting the National Counterterrorism Center and other government officials – and, as a result of a particularly evil tactic, the attacks have killed almost 200 people, including public officials, CIA employees, and rescue workers. It was an act of considerable violence that calls for extreme measures in response from elite counterterrorism operative Mitch Rapp and his trusted team member and protégé, Mike Nash.

Now that the initial shock of the attack has passed, key Washington officials are up in arms over whether to go after the agents who put their lives on the line and stepped into the path of the enemy’s bullets, saving countless American lives, without any thought of potential legal consequences. Not for the first time, Rapp finds himself in the infuriating position of having to explain the realities of national security to career politicians whose comfortable view from the sidelines is inevitably obstructed and heavily influenced by their own parochial, electoral and media concerns. On top of this, someone is leaking secrets about CIA operations to the press and elected officials, both intent on making the most of their big scoops, and putting Rapp and his team in the spotlight – as scapegoats if possible – right in the middle of the “blood sport” that is D.C. politics.

Meanwhile, three of the al Qaeda terrorists responsible for the attacks in D.C. are still at large, holed up in an isolated part of Iowa. Rapp and his team have been unofficially ordered to find them by any means necessary. Cracks are opening in the relationship between the terrorists – one, a well-educated and –travelled man, other other a blinkered, rash zealot without a clue about the real world, having spent too much of his life being brainwashed in a Madrasah.

All is not well, however, when Rapp sees that Nash is cracking under the pressure of the mission, the memories of what he witnessed during the terrorist attack haunting him. To save his friend and calm the naysayers on Capitol Hill, he makes a decision to push Nash temporarily out of the main action; to get his head straight before it’s too late, and to protect his family life. Nash seems to have been brought into the series to serve as Rapp’s conscience or moderating influence – he’s younger, more idealistic, and certainly less of a loose cannon.

Pursuit of Honor has a slower start than previous Rapp novels. Rapp comes across as more introspective and perhaps even nostalgic, as he reminisces about his training and his murdered wife, Anna Reilly. Despite this change in pace, the author’s prose is still extremely tight, and coupled with the excellent plotting, make for an engrossing and relatively-quick read.

A recent article in The New Republic, “The Beck Supremacy”, was about Pursuit of Honor and political thrillers as a whole. The author argued that the genre had been ‘hijacked’ by the right. While it is clear that Flynn leans right, he does not do so in a way that alienates centrist or left-leaning readers. In fact, like the best in his genre, Flynn is able to make all sides of any argument that crops up in his novels sound pretty reasonable, avoiding any temptation to make his characters come across like buffoons or two-dimensional. Flynn is not quite as good at this as Kyle Mills, but it must be said that Mills has an exceptional talent for this.

[More on this can be found here.]

Flynn makes frequent reference to “the opportunists on Capitol Hill” who think the CIA is the “fascist wing of the American government”, but (justifiably) pulls no punches when taking a look at Congressional motives and methods, and his negative opinions of Capitol politics:

“this partisan game that everyone wants to play in Washington. Republican versus Democrat… liberal versus conservative… none of that matters… the only thing we’re supposed to concern ourselves with is national security.”

Highly recommended for all fans of thrillers and political novels.