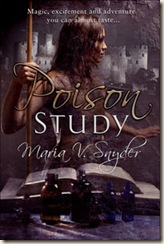 The first two novels in a compelling new fantasy series

Poison Study: Yelena has a choice: be executed for murder, or become food taster to the Commander of Ixia. The story then follows her journey from prison cell to her new role as first-defence against assassination attempts. She leaps at the chance for survival, but her relief may be short-lived. Life in the palace is full of hazards and secrets. Wily and smart, Yelena must learn to identify poisons before they kill her, work out who she can trust, and spy on those she can’t. Who is the mysterious Southern sorceress who can read her mind? Things get even more dangerous when Yelena realises she has magical powers of her own, for using magic in Ixia is punishable by death…

I couldn’t put this book down. Sarcastic and troubled, Yelena is far more than a one dimensional character, and is proactive in determining her own fate, making her an appealing and complex character. Throughout the novel, Snyder constantly teases the reader with glimpses of her past, forcing you to piece it together slowly. Yelena’s world is intricately realised, particularly, and appropriately for a food taster, the smells and flavours she encounters. The developing relationship between Yelena and Valek is sharply observed, in a book in which no character’s intentions are clear. Snyder keeps us guessing right up until the final page. A gripping read. 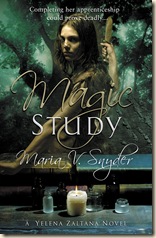 Magic Study: In this eagerly-anticipated sequel to Poison Study, Yelena has returned to Sitia and been reunited with her long-lost family. However, she doesn’t fit in, and her brother is less than delighted to see her again, resenting her return to the family. She also needs to learn to control her magical powers, before she accidentally blows herself (and others) up. And there’s also the small matter of the order for her execution in Ixia. So Yelena travels to the Magicians Keep to begin her apprenticeship. But trouble keeps on following her. As she struggles to understand who and what she is, a rogue magician is abducting and killing girls, and it looks like Yelena is next on his list.

Magic Study is just as gripping as its predecessor. Yelena is a thoroughly modern heroine who battles magicians but also worries about relating to a family she hardly knows. The action is fast-paced and full of twists and turns, and Snyder delights in turning the reader’s preconceived opinions about her characters upside down. A fairly large cast of characters is kept firmly in check, and again her flair for description illuminates the differences between the countries and people of Sitia and Ixia. Part adventure, part detective story as Yelena and the other magicians race against time to find the killer, Magic Study will keep you spellbound. Highly recommended.

With such good plotting, quality writing, and a superb new heroine, Poison Study and Magic Study mark the beginning of something great from a promising new voice in fantasy fiction.

The journey concludes in Fire Study, which is out through MIRA books in January 2009 (we will bring you a review of this, too).