“Only In Death”, by Dan Abnett (Black Library) 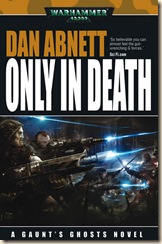 The excellent, eleventh outing for Commissar Ibram Gaunt and his Tanith Ghosts

Dan Abnett’s writing (prolific as it is) has never failed to live up to expectations. From the quality on display in Only In Death, it’s also clear why the Gaunt’s Ghosts series remains the Black Library’s most popular and successful. In fact, I’d go so far as to say that it’s perhaps one of only three of their series worth bothering with. The other two are Felix & Gotrek (fantasy, based in the Warhammer world) and the Horus Heresy series (a “historical” series based on the foundation of the Warhammer 40,000 universe – though, this has been rather disappointing of late).

Anyway, back to Only In Death. This time, Gaunt and his troops are far from the main battlefront in the crusade to liberate the Sabbatt Worlds, stuck on the fortress world of Jago, holed up in Hinzerhaus, an apparently haunted fortress. And then the enemy attacks…

As the Ghosts start jumping at, well, ghosts, Gaunt must keep his troops focused and on-mission. As always, the novel is told from a number of perspectives, including those of Gaunt, Dalin Criid (the son of two Ghosts, and the regiment’s first recruit-from-within) and his closest comrades, Viktor Hark (who’s having strange dreams), the reliable Larkin (who’s still slightly crazy, and coming to terms with his prosthetic leg – Gaunt cut off his real one in the previous novel, The Armour of Contempt), and a couple of other returning voices such as Varl (whose squad is perhaps the most amusing and quietly disobedient). The story is a slow-burning tale of suspense, brutal action and the classic theme of triumph-over-seemingly-unbeatable-odds, not to mention the Ghosts' continued streak of good luck.

Only In Death has the feel of a reliable friend; whenever you read a Gaunt’s Ghosts novel, there’s a comfort level that’s met – despite the situations Abnett puts his characters through. It’s a bit like re-watching The Matrix trilogy (if it was grittier, with a more fulfilling end): you know they’re going to win, but you also know that not everyone’s going to make it. Abnett’s still as talented as ever, this time writing a novel that is more suspenseful and creepy, though still with plenty of action. His ability to set a scene, create just the right atmosphere and believable characters (who speak in realistic dialogue), and keep the reader interested and turning the pages remains intact (perhaps even unsurpassed), and it’s not difficult to see why this series is so successful. Abnett’s distinct humour runs throughout, particularly in the patter between the troops; you’ll be amused plenty of times, though this isn’t intended to be a comedy, so don’t expect laugh-out-loud moments. Only In Death is a lot more suspenseful than the previous novels, which have usually been far more action-oriented.

If you haven’t read the rest of the series, then I’d recommend you do so before you read this. Not because you’ll be totally lost, but while these work as stand-alone novels, they are far more rewarding when read within context of the whole series – you’ll also find it very difficult not to get attached to the characters, which only gives the series and Abnett’s stories that much more impact. A return to form after a less-than-exceptional (though still very good) run. Here’s to hoping that Blood Pact, the next in the series (out May 2009), continues in such a good vein.