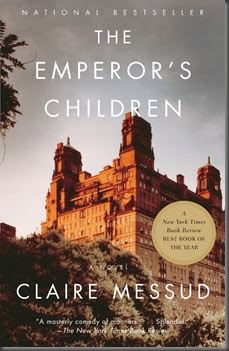 An interesting tale of privilege in New York, in the lead-up to 9/11

A novel about the intersections in the lives of three friends, now on the cusp of their thirties, making their way — and not — in New York City. There is beautiful, sophisticated Marina Thwaite — an “It” girl finishing her first book; the daughter of Murray Thwaite, celebrated intellectual and journalist — and her two closest friends from Brown, Danielle, a quietly appealing television producer, and Julius, a cash-strapped freelance critic.

The delicious complications that arise among them become dangerous when Murray’s nephew, Frederick “Bootie” Tubb, an idealistic college dropout determined to make his mark, comes to town.

As the skies darken, it is Bootie’s unexpected decisions — and their stunning, heartbreaking outcome — that will change each of their lives forever.

This novel came very highly recommended, but for some reason it took me quite a long time to get around to reading it. I have a weak-spot for novels set in New York City. This is the first one I’ve read that takes a look (near the end) at the impact of 9/11 on inhabitants of the city – not in terms of politics or the War on Terror, but rather as an event that would turn the lives of these protagonists upside down, in both large and small ways. I certainly enjoyed reading the novel, but it’s not perfect. It offers some shrewd, pointed commentary on the foibles and anxieties that face or characterise the lives of privileged (and some not-so-privileged) white youth in New York City.

The friends at the core of the story are quite typical, in many respects. This works in their favour, and makes the novel pretty easy to sink in to. They are from a wealthy set, but each hides their own insecurities from the others. Julius, for example, is down on his luck, and has been hiding the fact that he has resorted to temping in order to make ends meet. Danielle is ticking along, but then develops a relationship with someone she never would have thought possible. Marina is a typical, spoiled, highly privileged daughter of an accomplished, beloved-of-the-NY-literary-set journalist. In the meantime, Bootie, Marina’s awkward cousin with delusions of literary/journalistic grandeur, a surprisingly strong sense of his own iconoclasm, moves to New York, and ends up causing quite the unpleasant stir.

It’s tricky to go into too much detail, as is so often the case. Messud weaves a number of twists and turns into the novel, as her protagonists navigate their way through their personal and professional lives – Marina struggling to finish the long-fallow book project she’s been paid to write (years ago), and also having to deal with her new boyfriend’s obvious distaste and derision for her father’s reputation; Danielle trying to get her productions green-lit, while keeping her new romance secret from her friends (who would undoubtedly disapprove); Julius, whose love-life takes a turn for the better, before spiraling catastrophically; and Bootie’s attempts to make a life in New York, balancing his awe, jealousy and eventual disappointment in Marina’s father (for whom he works as an assistant for a short while).

The novel had two particular strengths. First, the characterisation – which I know I haven’t outlined particularly well, above – was excellent. These are people who are by no means perfect or in any way heroes. There is a natural ugliness, almost, to their personalities: the natural jealousies, the petty narcissism, and so forth. But also their privileged ennui, as they attempt to figure out what it is they are meant to be doing with their lives (something I can sometimes relate to). There were a few uncomfortable moments when I would read one of the characters’ inner struggles, perhaps raise a judgmental eyebrow or sneer, and then realise that I myself had harboured similar thoughts, worries, or jealousies on occasion.

Another thing I really liked about the novel, were the moments in which characters would talk about books. Perhaps a strange thing to pick up on, given that they are universally small and fleeting moments in the story, but I really liked it. For example, when Danielle is looking at her bookshelves in her apartment, a form of biblio-memoir:

… a wall of books, both read and unread, all of them dear to her not only in themselves, their tender spines, but in the moments or periods they evoked. She had kept some books since college that she had acquired for courses and never read — Fredric Jameson, for example, and Kant’s Critique of Judgment — but which suggested to her that she was, or might be, a person of seriousness, a thinker in some seeping, ubiquitous way; and she had kept, too, a handful of children’s books taken from her now-dismantled girlhood room, like Charlotte’s Web and the Harriet the Spy novels, that conjured for her an earlier, passionately earnest self, the sober child who read constantly in the back of her parents’ Buick, oblivious to her brother punching her knee, oblivious to her parents’ squabbling, oblivious to the traffic and landscapes pressing upon her from outside the window.

Messud does a great job of giving each character their own voice (although, sometimes only slightly different from others), and she’s doing a great job of deconstructing her protagonists and their neuroses and petty jealousies. But, and this is my only real issue with the novel: it could have been trimmed down, I think. There were times when it felt like the novel veered off into an unnecessary tangent, without adding enough to the story to justify it, or being too mundane to really be worth it. I also think the author has never found an over-long sentence she didn’t like. There were, for my taste, far too many run-on sentences. There were so many instances when a well-placed full-stop would have done wonders for the prose and reading experience; any number of sentences that were begging to be broken up into easier-read sizes. Take, for example, this paragraph (which is by no means the worst offender):

As they each gingerly dismantled and consumed their fanciful dishes — in her case at least, a fancy that, Danielle thought but did not say, was less original and extraordinary than the restaurant’s reputation and price had led her to expect, and therefore disappointing, as she had chosen the venue to impress — Danielle proceeded to explain that she had been taken with his use of the term, that she had, perhaps wrongly, heard in it a certain echo, the suggestion of an ethos that she thought might be found, to greater or lesser degrees, in certain other publications or presentations, and that she, in her producer’s role, had thought to articulate into, well, a movement.

Or this stuttering, shorter example: “and there was, had been, at the very sight of him, at the front of the line at the restaurant, a pull that Danielle felt to be inevitable, personal, even spiritual — a magnetic attraction.” And the use of near-repetition to make or reinforce a point (“having felt, and felt keenly”).

There are, of course, moments of levity that break up what could otherwise become a rather heavy-handed narrative. Mostly, this occurs when theses privileged characters are confronted with simple situations they are entirely ill-equipped to deal with (thing that would, ordinarily, be dealt with by the Help). For example, when Marina’s cat, Pope, dies:

“Oh.” The two of them stood side by side without approaching. “You’re quite sure?” Murray asked, scratching at the back of his head.

“Is your mother asleep?”

“Hmm. Worse things could happen than leaving her there for the night, don’t you agree?”

The idea seemed somehow sacrilegious to Marina, though whether the offense was against the cat or the bed and its imminent occupant, she couldn’t have said. “Don’t dead things, you know, leak?”

“Not overnight, I wouldn’t think. And it’s pretty cool in here.”

And this, later moment in which they discuss what to do with books from university…

“What did you major in, in college?” she ventured again, after a time.

“You must have been English, right?”

“Does it show that badly? We all were. I was double, English and Philosophy. I don’t remember a thing.”

“Seriously, though, I look at the books on my shelves and it’s clear that I read them, back then, but I can’t remember ever doing it, and I don’t have the first idea what they might be about.”

“Read them again, then?”

Danielle sighed. “Not now. Maybe someday. I look at them and wonder who I was, you know? It’s a long time ago. I’m thirty.”

“You should throw those books away.”

“Sacrilege. It would be.”

“Do you hang on to clothes you haven’t worn for ten years? Or bags of pasta, or cans of beans?” Danielle did not need to answer. “What is it about books? Perfectly rational people get crazy about their books. Who has time for that?”

“I measure my life out in books.”

Ultimately, The Emperor’s Children is a richly drawn, well-observed story of how these friends and relatives navigate their world. The characters develop naturally over the course of the story, and while they felt rather cookie-cutter at the beginning, they quickly developed their own voices. Despite the sometime-trouble I had with Messud’s drawn-out prose-style, this is a recommended read. I’ll be sure to read her latest novel, The Woman Upstairs, very soon.