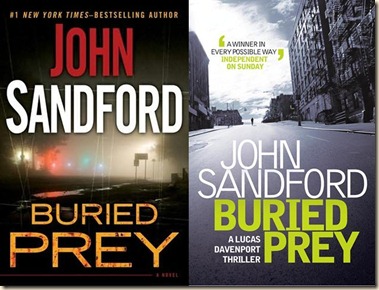 A case from Lucas’s past comes back to haunt him

A house demolition provides an unpleasant surprise for Minneapolis-the bodies of two girls, wrapped in plastic. It looks like they’ve been there a long time. Lucas Davenport knows exactly how long.

In 1985, Davenport was a young cop with a reputation for recklessness, and the girls’ disappearance was a big deal. His bosses ultimately declared the case closed, but he never agreed with that. Now that he has a chance to investigate it all over again, one thing is becoming increasingly clear: It wasn’t just the bodies that were buried. It was the truth.

In Buried Prey, the 21st thriller featuring Minnesota detective Lucas Davenport, we finally get to see the detective as he was at the start of his career, as the first case he worked as a detective rears its head once again. Overruled at the time, Lucas sees this as an opportunity to finally discover the truth of what happened to the two girls, which leads him to recall the earlier case, in the form of an extended flash-back. This novel is yet another great addition to the series, adding more detail to Lucas’s back-story. I am continually impressed by Sandford’s ability to keep the series fresh and his characters so interesting and well-developed. This is a great thriller.

It’s really interesting, but also jarring, to read about the young Lucas Davenport. Sandford’s done a great job of writing an impulsive, impressionable ex-jock, new cop punk (sort of). He’s indelicate, engaged with the work almost as much for the rush as for doing what’s right. He’s seconded to the homicide detective department after finding himself involved in the investigation of two missing young girls. This Lucas is quite obnoxious and cocky, but by the end of the ‘flashback’ portion of the book (it’s roughly the first half of the novel), we start to see him growing and evolving into the beginnings of ‘modern-day’ Lucas.

Back in the here-and-now, Sandford continues to interweave Lucas’s family life and career extremely well. The main character’s development is as integral to the story as the crimes he is solving. Sandford handles Lucas’s personal life expertly. It’s not saccharine-sweet (think James Patterson’s Alex Cross series), nor is it detail just thrown in to add ‘depth’ to a character who would otherwise be rather thin. Rather, Sandford incorporates this aspect of Davenport’s life properly, as part of the overall series narrative, as well as for this particular novel. It has been great getting to know the character over 21 books, seeing him grow and develop (not to mention age realistically). His family has grown – he’s re-married, has a ward, he has a son of his own, and a daughter on the way.

As the investigation into who really killed the two girls heats up, and another tragedy escalates Lucas’s relentless quest for vengeance, Weather and Lucas’s core group of cop friends (including Del, who he first met at the start of his detective career and has stuck by him ever since) will play an integral part in keeping Lucas on the right side of the law. There are some interesting, tense scenes when they confront him about his tendency to bend the rules, not to mention his temper and trigger-finger.

Overall, this is an excellent detective thriller. Sandford writes solid, brisk prose and has crafted a great narrative. With the look back at Lucas’s early career, Buried Prey stands out from other Davenport novels and is stronger for it.

It was, as always, comfortable and a pleasure to be reading about Davenport, his companions, and his investigations again. I’ll have to make a better effort to keep up-to-date (I will be reading and reviewing Stolen Prey very soon), and I also hope to catch up with the Virgil Flowers spin-off series (of which I’ve only read book one).

If you have any interest in crime thrillers, then John Sandford is a must-read. This is a very highly recommended series and novel.

The Kidd Series: The Fool’s Run, The Empress File, The Devil’s Code, The Hanged Man’s Song

(This series is semi-connected with the Prey series, as the main character crops up in a couple of Davenport novels and vice-versa. It’s a great, short series about an art-thief and hacker.)