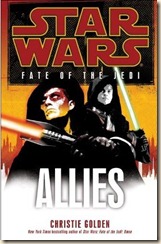 The Fate of the Jedi continues, with a most peculiar alliance…

What began as a quest for truth has become a struggle for survival for Luke Skywalker and his son, Ben. They have used the secrets of the Mindwalkers to transcend their own bodies and speak with the spirits of the fallen, risking their very lives in the process. They have faced a team of Sith assassins and destroyed them, but the sole survivor, apprentice Vestara Khai, has summoned a fleet of Sith frigates to engage the embattled Skywalkers. An unprecedented proposition brings Jedi and Sith together in an alliance against an evil even more ancient and alien.

While the Skywalkers and their Sith allies set off on their joint mission into the treacherous Maw region, Han and Leia Solo risk arrest and worse to aid the Jedi imprisoned back on Coruscant. Chief of State Natasi Daala has issued orders that will open a permanent schism between her government and the Jedi Order — a schism that could turn all Jedi into renegades and wanted criminals.

In the depths of the Maw the future of the galaxy will be decided. There, the Skywalkers and their Sith allies will come face-to-face with a staggering truth.

After Aaron Allston’s brilliant Backlash, there was a lot riding on Allies to maintain the quality and momentum of a series that was finally hitting its stride. I should say, right off the bat, that thus-far Golden’s contributions to the Star Wars series have not been my favourites. She has a style and approach that feels very different to that of Allston or Troy Denning. It’s not that she’s a bad writer – far from it: I have devoured all of her novels in the series just as I have other authors’. My main concern has been her propensity for schmaltz and a slightly higher tolerance for cheesy scenes (though, in fairness, Denning is not entirely immune to these, either). Nonetheless, Allies was an enjoyable read, with only a couple of things I thought I’d pick up on.

Luke Skywalker had a different feel in this novel. Where before he is highly analytical and cautious (occasionally to his detriment), he comes across as extremely hostile and cold in Allies. True, as the Grand Master of the Jedi Order, he’s not exactly going to be bosom-buddies with a flotilla comprised of an ancient Sith Tribe. Despite this, however, he lacks the caution and even-handedness that characterised his approach to pretty much everything in most, if not all, Star Wars novels that have come before Allies. In some ways, in fact, he acts like a Sith towards his less-than-ideal allies, at one points stating “Compassion is for those who deserve it”, after the accidental death of a handful of Sith. He does, however, voice his overall concerns succinctly and logically:

“We don’t know these Sith. We don’t know what motivates them, or what their game is, or why they’ve really chosen to ally with me. I know what they’ve said, but that shouldn’t be regarded as anything even in the vicinity of the truth.”

[The series of e-novellas by John Jackson Miller are a way for the reader to get to know the Lost Tribe of the Sith. All are available free from various sources, including StarWars.com and the Sony eBook store]

Since taking a more philosophical look at the Force over recent sequences, I must say the Jedi on Coruscant are starting to come across as rather feckless and effectively useless. They sit there as Daala tightens her noose, impotently discussing what to do, while the world outside moves forward without them. Daala is without doubt starting to repeat the mistakes of her predecessors, over-reacting on a rather weak premise (something I mentioned in previous reviews), and I was very frustrated with Kenth Hamner – the Master chosen to replace Luke while he was exiled. I remember him being a quiet, but forceful presence in the novels, and not the dithering incompetent he’s portrayed as here. Bureaucracy, apparently, is the scourge of Jedi just as it is of mere mortals…

It’s perfectly possible that I’m reading too much into it, but these are two things that really jumped out at me.

Ben Skywalker, on the other hand, seems to be getting rounded out even more as a character – his attraction to Vestara is interesting and adds some internal conflict that he’s not entirely capable of controlling all the time. I would not be surprised if he starts to be a more central character in future novels, as Luke (maybe) is slowly retired?

One new thread to the series is the issue of slavery in the Star Wars galaxy. At first it seems a non sequitur, not particularly relevant to the main thread of the story. Two-thirds of the way in, Lando and Jaina are thrown into a situation that might prove pivotal, but I was disappointed by the rather clunky approach, and it felt a little forced into the plot. It’s not a bad few chapters, by any means, it just didn’t quite fit in as well as other events of the series. Whether or not this will translate into something more important and/or profound in future volumes… well, we’ll just have to wait and see, but it does look like events on Blaudu Sextus will become important.

One thing that cannot be denied is the quality and pace of Golden’s prose – you can easily burn through pages and chapters of any Star Wars novels (with very few exceptions), and the author has done a good job of keeping the pace throughout. With Allies, Golden has stepped up her game, and the main series thread (surrounding Luke and Ben) has really kicked off, with a number of possibilities for the future – all of which promise good things.

While this review might give you the impression that I leaned towards not liking the novel, this is certainly not the case. The issues I describe above are there, and the reason I focussed on them was because I’ve written a number of Star Wars reviews now that don’t really mention short-comings of the novels (I’m usually too busy being swept up in the story to really notice anything I didn’t like as much). One truth about the vast majority of Star Wars novels is that they are fun and fast-paced adventures; the worlds and characters are familiar through the movies, the action frequent and not over-done, and the plotting is well thought out and gripping. I like that space dogfights are less prominent, now, as the New Jedi Order series was over-stuffed with them (there are only a couple of ways to write them, if we’re honest) – this allows for more options for action, intrigue and plotting.

The Fate of the Jedi series has been very good at meeting and even exceeding expectations – particularly in the paths it takes. There have been many surprises along the way, and they’ve all been interesting and engaging sci-fi action adventures.

Recommended, this is top-notch science-fiction.