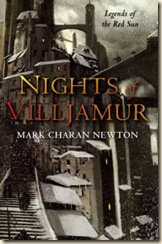 Political intrigue, mysterious murders, and genocide… Book one of the Legends of the Red Sun kicks off with a bang

An ice age has descended on a chain of islands, and citizens from all over have congregated at the city of Villjamur to seek solace and sanctuary within its walls and among its ancient spires and bridges. Times are dark, with forgotten technology and banshees in the city, and further afield the dead are seen walking across the frozen tundra.

A number of storylines are woven together in this first installment of Newton’s new series. When the Emperor commits suicide, his closest confident and captain of his bodyguard, Brynd, is tasked with bringing the heir to the throne, Rika, home to rule in his place. Unfortunately, the sinister and Machiavellian Chancellor Urtica has his sights set on securing the throne for himself. A senior investigator in the city inquisition, Jeryd, must solve the savage, high-profile murder of a prominent city politician, while simultaneously battling with his own demons, his broken personal life. Randur, a serial womanizer manipulates his way into the imperial residence with a hidden agenda…

Not content to leave the intrigue and suspense within Villjamur’s walls, tens of thousands of citizens on the northern islands of the Empire are dying in a strange, inexplicable genocide.

Villjamur is a dark, hard place, populated by a cast of characters so varied and colourful it is almost impossible not to be drawn in. Newton is adept at conveying his characters’ emotions and states-of-mind through his prose. Battle or action scenes (particularly in the beginning) are written in a way to convey the chaos and confusion his characters are likely to feel, making the novel all the more immersive. His characters are equally strong and flawed, and one finds oneself caring about their plight and struggles, rooting for them throughout. There are plenty of surprises along the way, as the author slowly reveals more and more about his characters – some true shocks, and some pleasant or interesting surprises.

The prominence of political intrigue and suspense within the plot seems to be a growing tradition within the fantasy genre, and one that can be welcomed wholeheartedly. Nights of Villjamur is filled with the machinations and plotting of a political thriller, set in a world so very different from our own. Set to a backdrop of an upcoming ice-age that will leave the Empire weakened and struggling, it makes for a very interesting premise and read.

Filled with strange and bizarre creatures (the “garudas”, for example), Nights of Villjamur is an excellent book indeed, standing out with the author’s considerable imagination and inventiveness and attention to detail.

A recommended, very good start to a new series.

Posted by Civilian Reader at 12:46 PM