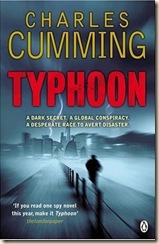 The latest spy-thriller from the new master of the genre

It is 1997, only a few months before the British rule in Hong Kong comes to an end, and China retakes the reins. It is a city populated by every intelligence agency; each jostling for influence and the latest scoop or discovery – not unlike the journalist who narrates the tale.

When an elderly man, supposedly a university professor, emerges from the sea off Hong Kong, claiming he knows of secrets he will only divulge to the British Government, a series of events is set in motion that will have repercussions almost a decade after the story begins. A sinister and ambitious plot aimed at destabilizing the People’s Republic of China for monetary and political gain is hatched in the backrooms of power. Joe Lennox, a young British SIS operative, the first to talk with the Chinese professor, finds his career on the line, only his concerns for his job are dwarfed by the wider geopolitical ramifications. Yet he must still contend with a girlfriend – Isabella – his superiors don’t approve of, an American opposite he doesn’t fully trust but who wants Isabella for himself. His characters are flawed yet alluring, his eye for the faults of gweilos in Asia sharp and occasionally amusing.

A novel with a focus both on its individual characters and also the wider global situation, Typhoon has an original premise that is flawlessly executed and tightly written, with a panache and skill reminiscent of James Clavell’s Tai-Pan (one of the best novels of all time) and Nobel House. The novel is brilliantly researched, and Cumming’s attention to and understanding of the politics surrounding China’s place in the world is right on the button, giving the novel a contemporary relevance and sense of urgency.