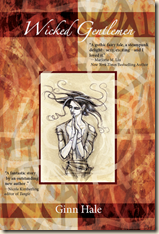 Belimai Sykes is many things: a Prodigal, the descendant of ancient demons, a creature of dark temptations and rare powers. He is also a man with a brutal past and a dangerous addiction.

Belimai Sykes is also the only man Captain William Harper can turn to when faced with a series of grisly murders.

But Mr Sykes does not work for free, and the price of Belimai’s company will cost Captain Harper far more than his reputation.

From the ornate mansions of noblemen, where vivisection and sorcery are hidden beneath a veneer of gold, to the steaming slums of Hells Below, Captain Harper must fight for justice and for his life. His enemies are many and his only ally is a devil he knows too well. Such are the dangers of dealing with the wicked.

This, apparently, is Ginn Hale’s first book. I can’t wait to see what she comes up with next! The concept of Wicked Gentlemen is pretty simple: Think Dickensian London, complete with gaslights and smog. Add the Inquisition, who wear a dapper cross between military uniform and a priest’s dog-collar, and are armed with holy water, prayer-engines (devious torture instruments) and pistols. Oh, and the Prodigals, descendants of ancient demons, who now live in the ghetto of Hells Below, persecuted by the rest of the population. Troubled Belimai Sykes is a Prodigal and occasional investigator, and Sykes is the devil that Inquisition Captain William Harper makes a deal with when his sister disappears. Their search for Joan will take them to prison cells, grand houses, and even into the slums of Hells Below on the trail of dark forces, as their own relationship develops into something more precious, but potentially more dangerous for both of them.

Belimai reminds me of Sherlock Holmes at his darkest moments, but without Holmes’ superior know-it-all attitude. Belimai has attitude, certainly, but it’s of the more sarcastic variety. The first part of the novel is told from his point of view, while the rest is from Harper’s, which works brilliantly and gives real insight into Belimai’s character. Hale’s strengths include an assured plot, beautifully crafted images such as “The night hung in tatters”, and characters we actually care about. Part steam-punk crime thriller, part romance, Belimai and Harper’s relationship unfolds passionately and movingly as they delve deeper into the underworld to find who is behind the series of grisly murders.

Utterly gripping and beautifully written. Not that one should judge a book thus, it has an attractive and unusual cover, too. Hale is currently working on a sequel, Lord Foster’s Devils.

For a quick taste of Ginn Hale’s work, try the short-story collection, Hell Cop, and she has made a short story available, here. (PDF)

Posted by Civilian Reader at 11:43 PM