“Luke Skywalker & The Shadows of Mindor”, by Matthew Stover (Century) 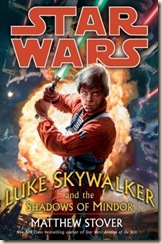 A welcome return to the earlier days, following the defeat of the Empire…

With most Star Wars novels now set either in the prequel years or way beyond the events of the movies, Luke Skywalker & The Shadows of Mindor is based on events set after The Return of the Jedi, featuring all the main characters from the movies. This should be refreshing for many fans, who have become disappointed that the leads from the movies are increasingly sidelined by their offspring and completely new characters.

The story starts with Luke Skywalker still enjoying the unprecedented renown and awe from defeating the Emperor and Darth Vader. Skywalker is also struggling to come to terms with other people’s opinion of what a Jedi is and can do, which makes his job as a general pretty difficult, as his subordinates kowtow to almost everything he says through a misunderstanding about the extent of his powers. Skywalker is put in charge of the New Republic’s Rapid Response Tactical Force. His mission is to confront and defeat the elusive, mysterious Lord Shadowspawn, residing in the Mindor system. Unfortunately for our hero, his enemy is not at all what he first appeared, and is far more cunning and ruthless than any could have imagined. Han Solo, Chewbacca and Princess Leia (as well as R2-D2 and C-3PO) come rushing to Luke’s aid, only to find the situation far more precarious and lethal than expected.

This novel has everything needed to make a good Star Wars tale: space dogfights, lightsaber action, a delightfully twisted (and most intriguing) enemy, plenty of peril, adventure, and witty banter between Chewie and Han. Stover’s writing and plotting are far better than in his previous Star Wars novel, Traitor, which was part of the seemingly-never-ending New Jedi Order series.

The novel brings new elements of the Star Wars universe for the reader to think about, specifically the use of political propaganda (which Lord Shadowspawn uses with great skill), and also a little more detail of the Sith and their various types of alchemy (building on what we’ve learned from Drew Karpyshyn’s Darth Bane series). Unfortunately, Stover is one of the novelists who insist on spelling out Wookie growls and R2’s warbles, making for some cringe-worthy and irritating passages of dialogue. Speaking of R2-D2, though, the passages that are written from the loyal droid's perspective were superb. Some of the allusions and references to previous novels and comics were a little lost on me, too (Luke’s previous interactions with former-Emperor’s Hand Blackhole, for example, were completely new to me, though a rather important part of the story). As the only weaknesses of the novel, they are minor ones, for sure.

Despite it’s rather clunky title (why not simply, “The Shadows of Mindor”?), this is one of the best new Star Wars novels in quite some time. Stover’s writing is far tighter and quicker than some other novelists employed to expand the Star Wars canon and universe, and I burned my way through this in two sittings. From the opening page until the final chapter I was hooked and thoroughly entertained, unhappy whenever life got in the way of reading.

Luke Skywalker and the Shadows of Mindor has breathed new life into the series, which had given some worrisome indications that it might be flagging, groaning under the weight of an ever-expanding cast and myriad different factions and side-stories.

Highly recommended for all fans of the movies and the genre as a whole.

Preceded by: “Truce at Bakura”, by Kathy Tyers

Posted by Civilian Reader at 6:18 PM