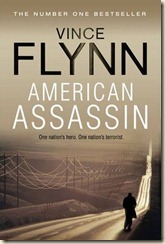 What type of man is willing to kill for his country, without putting on a uniform? The education and evolution of a CIA Assassin

With tensions simmering in the Middle East, CIA Director Irene Kennedy is instructed to form a new group of clandestine operatives – men who work under the radar and do not exist. She finds just the candidate in the wake of the Pan Am Lockerbie terrorist attack.

Two hundred and seventy souls perished that cold December night, with thousands of friends and family left searching for comfort. Gifted college student Mitch Rapp was one of them. But he wasn’t interested in solace. He wanted revenge.

Six months later, after intense training, Mitch finds himself in Istanbul where he tracks down the arms dealer who sold the explosives used in the attack. Rapp then moves on to Europe, leaving a trail of bodies in his wake. All roads lead to Beirut, though, and what Rapp doesn’t know is that the enemy is aware of his existence and has prepared a trap.

The hunter is to become the hunted, and Rapp will need every ounce of skill and cunning if he is to survive…

After a short teaser-introduction set in Beirut, Flynn takes us back to the beginning of Rapp’s CIA career, and the punishing training he is put through. After an eye-brow-raising note stating that this began only a year before the Beirut job (surely it takes longer than that to train an assassin?), I quickly found myself swept up by the driven pace Flynn gives his story. It certainly helps that I’ve read every single one of Flynn’s novels, so the characters are familiar for me already, but there is no denying Flynn’s skills as an author – this is thriller writing at its best and most addictive.

Flynn takes us straight to the training camp, and how Rapp learns to fit in with the army and special forces recruits. Without any military service, he has some catching up to do in firearms, but in every other area he surprises and excels. A common thriller trope, there is also an antagonistic good guy – someone the reader will come to hate, and seems to be there just to torment our hero. In this case, it’s Victor. When the inevitable face-off takes place, I’d be lying if I didn’t feel a sinister thrill and quietly cheer when Rapp takes him down. After his training, Rapp is dispatched on his first mission (in Istanbul), and we are taken along for the ride. As we can expect from the genre, Rapp is a bit of a loose-cannon, and takes it upon himself to do things ‘his way’.

When the team are sent on their first missions, the novel’s story ratchets up a notch, as Rapp and the other operatives of Team Orion get to grips with their new lives. They go chasing terrorists and sympathisers in Istanbul, Zurich, Hamburg and Beirut. All the while, Rapp starts to realise why his CIA instructor, Hurley, has been such a bastard during training, and the lessons he’s learned are put to the test. American Assassin offers some interesting insight into the lives of special, covert operatives; the provisions they need to make, the risks they have to take, the secrets they have to keep (from friends, family, and also their own employers).

I wonder if Flynn’s decision to take us back to the beginning of Rapp’s career for his 12th novel (the 11th to feature Rapp) is a commentary on the thriller genre as a whole – after so many novels by so many authors, the US (or UK, in some instances) hero going after Islamic Terrorists in a post-9/11 world was starting to look worn around the edges. There are a number of successful authors writing in this genre who are now well-established – alongside Flynn, authors like Brad Thor and Alex Berenson are the most noteworthy and skilled authors (but far from only) writing near-exclusively about terrorism. Others, like Kyle Mills, spread their net a little wider.

Flynn’s writing and plotting are excellent, and the novel whips along at a pleasantly brisk pace. Everything about the novel and the characters is realistic and engaging – the institutional, geographical, and operational detail is superb and totally realistic. There’s no apparent exaggeration in the events that take place over the course of the novel, giving the novel an all-too-real feel.

There is, however, one thing that niggled: Rapp is a little too good. Sayyed, in Beirut, is also a little cliché for an Islamic Fundamentalist Bad Guy (he doesn’t actually feature as much in the novel as one might expect – most of the first half is from Rapp’s perspective). Flynn knows his audience: we’re not supposed to sympathise with the monster, or anyone connected with them, but we are supposed to find comfort in the knowledge that the US has supremely capable (super)men like Rapp who are willing to take any step necessary, and give the last full measure of devotion for the cause, if needs be.

“So, if it comes down to it... you don’t think you’d have a problem taking another man's life?”

“Who the guy is, and more important, what he’s guilty of.”

Rapp’s ‘perfection’ is addressed in the novel, as Kennedy and Lewis (the CIA shrink) aren’t sure what to make of Rapp’s abilities and overall manner and psyche. But, in a world of flawed anti-heroes, there’s something comforting about having a proper, heroic and seemingly perfect protagonist; someone utterly patriotic and focussed. In previous novels, Rapp was older and his life was a procession of decisions of varying-shades-of-grey, the line between black and white, good and bad, ever-more blurred – although, his relationship with Anna (who he meets in his first outing, Transfer of Power) did mellow his character slightly, until her unfortunate and distressing demise in Consent to Kill (2005). In American Assassin, Rapp is still young, has just been recruited into the CIA, and is far more idealistic. He’s not yet the granite-hard, experienced killing machine the CIA shaped him into, but he is, perhaps, a little too ready for all of this. It’s a minor quibble, but I know some people will take more exception to this, so thought I’d mention it and place it in context.

Rapp doesn’t fit into the CIA culture of the time (something that stays with him over the course of the series): He’s unpredictable, freakishly quick-thinking and strategic, and not a little lucky. It’s quite fun to watch as the aged Hurley (instructor, grizzled veteran, and all-round bad-ass, oft-cussing field captain) and Irene Kennedy (straight-laced, proper and methodical) are frequently flummoxed or caught out by Rapp’s general manner and his inattention to authority and operational norms. It’s a clear commentary on the restricted, bureaucratic and operationally unimaginative impression some have of any governmental department – but particularly US governmental bureaucracies – that is far more interested in covering its collective asses than achieving or doing what is right for the country.

The “lion” in Beirut, the man everybody’s scared of, liable to show his displeasure from the barrel of a gun, Sayyed is very different when he meets with his Russian financial and material benefactors: he is meek, deferential and definitely the lesser partner, while still distrustful and paranoid about the Russians’ intentions and commitment to the cause. It’s an interesting dynamic, even if it’s a commonly-used thriller trope.

It is perhaps surprising how long it took Flynn to give us more details about Rapp’s girlfriend, Mary, whose death is the defining event that lead him to accept Kennedy’s recruitment overtures in the first place. For those familiar with the series, the basic facts are already known, but in American Assassin we get a fuller picture of Rapp’s upbringing and just a little insight into his evolution from All-American superstar-athlete to deadly, ruthlessly efficient CIA killer.

It’s been a while since I read anything in this genre – the last thriller I read was Dan Twining’s unfortunately less-than-satisfying The Geneva Deception. Reading American Assassin, though, I’m reminded of why I love the genre in the first place.

As with all of Flynn’s novels, there’s some commentary on the frustrating Washington, D.C., work environment – the need for secrecy, deniability, and endless bureaucratic manoeuvrings to get anything done is clearly frustrating. Flynn clearly retains his cynicism and disappointment of Beltway Politics and society. The setting, early 1990s (no date is ever specified) is well-drawn, and the differences between pre- and post-9/11 are stark, and Flynn’s portrayal of the pre-Global War on Terrorism era, with more rough-and-tumble, unpolished counterterrorism operations, is both interesting and ably realised.

Realistic, thoughtful, and gripping, American Assassin is a brilliant piece of thriller fiction, and a fine way to start the year. Flynn is a master of the genre, and still at the top of his game. Each of his Rapp novels is worthy of attention, and while they’re not as long as they used to be, they maintain a high standard. In fact, American Assassin could have afforded to be longer and I can’t imagine Flynn could have ruined the pace or flow, let alone lost reader attention.

New readers will be introduced to a series of already-available novels to enjoy and become addicted to, while established readers will learn a bit more about the past and evolution of a great, engaging character.