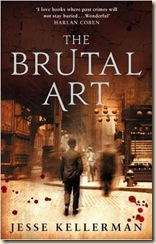 This is the first book I’ve ever read by Jesse Kellerman, and it will certainly not be the last. I don’t think I’ve ever taken to a new author so quickly. From the opening paragraph until the final sentence, this book had be hooked and engaged, unwilling to let me go, keeping me up well into the wee hours of the morning.

The story is narrated by Ethan Muller, successful 30-ish art dealer based in New York. Ethan is not the most pleasant of people – he’s self-aware, arrogant, and somewhat pretentious. But, in the same way that you like Hugh Laurie’s House, you will immediately be taken with Ethan’s honesty and dry wit. This wit is particularly on display when he turns his hand to social commentary, and especially when he’s critiquing those who inhabit the art world with him (pretentious, impressionable, absurd, with a sheep-like herd mentality) and those who think that buying a piece of expensive art makes them a patron of the arts, when really they just have far too much money.

Through a contact of his father’s, Ethan discovers a massive trove of art by a missing and mysterious artist, Victor Cracke. The art is brutish, disturbing, and horrific, yet beautiful and beguiling at the same time. What is more, the drawings are all connected, creating a huge piece, mind-boggling in size, scale and design (135,000 or so pictures make up the entire collection). What follows is first Ethan’s success at displaying and marketing his new find, followed by some revelations about figures in the first, central panel. It turns out, Cracke might be intimately involved in a series of murders that occurred in the 1960s, and Ethan finds himself reeled in to the world of cold cases, which might have repercussions far closer to home than he originally believes. Teaming up first with retired cop Lee McGrath, and later his daughter, Samantha, Ethan is driven to distraction by his need to solve the riddle contained within the drawings.

All the while, Ethan’s relationships – with his father, with the mature dame of the art scene Marilyn, and Samantha – intrude on his life, for good and ill. At the end, things take a decidedly dark, almost tragic turn, as the past catches up with the present in a twist I didn't see coming.

It would be easy to stitch a number of adjectives together in order to describe this book (such as “evocative”, “atmospheric”, and “gothic”), but much as for the artwork described in the novel, they wouldn’t come close to doing it justice. Kellerman has a rare talent for writing. Whether it is description or dialogue, he composes such prose as to almost compel reading. Stitching historical interludes (spanning back to 1847, and progressively closer to the present day) with a contemporary setting, The Brutal Art is a masterpiece of intricate and well-paced plotting. It poses the best of dilemmas: you feel the need to find out how it all ends, but at the same time the quality of Kellerman's writing makes you want it to never finish.

An essential read for all, The Brutal Art is the best thriller I’ve read in years.