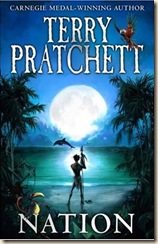 On the way back from his coming-of-age ritual, islander Mau’s Nation is wiped out by a tsunami. Brought with it, the schooner Sweet Judy is dragged through and over the island’s rainforest. Only one person is left alive.

Mau, who doesn’t wear a whole lot, comes across a woman who wears far too much and talks incessantly. The result is lots of misunderstandings. But, with the Nation gone, the two of them have to forge a whole new Nation, from scratch.

Nation is not your typical Pratchett novel. Like the Discworld, it is set in an alternate universe, only this one is still largely based on our own.

We still have Pratchett’s trademark wit and humour, his quick style, and good plotting. His wonderful inventiveness remains intact, also – even small things like the octopus arbori (tree octopus) are brilliant, especially given their inability to differentiate between coconuts and a person’s head.

My one criticism of Nation is that it takes just a little while to really get going – after the excellent introduction, and even though there are plenty of jokes and asides that will at least raise a smile, I found that it took some time for me to care much about the characters.

I can’t believe I’m writing this, given the unassailable position Pratchett usually has in my opinion, but I would only give this a cautionary recommendation. I laughed often, and was amused frequently, but for some reason this book didn’t hook me as his others do. Usually, I get through a Pratchett novel in about a day, maybe two if I have a lot of other things going on, but this one took me a long time to get through (hence the considerable gap between reviews on the site). Maybe, having read and reviewed quite a few thrillers in a row, I had difficulty making the transition back to fantasy.

It's also marketed as a children's book, which is quite surprising, given its very dark subject matter. Pratchett's children's books do often deal with very adult subjects, but compared to other “children’s” material out there, this is closer to Neil Gaiman's The Graveyard Book than anything else. Perhaps the subject matter is why I struggled to get into it: it has to be lighter on laughs. Also, I think that Pratchett is so at home in his Discworld that his occasional forays further afield can lack some of the obvious pleasure he takes in his creation, and perhaps that is why Nation failed to sparkle for me.

Still, even a slightly-below-par Pratchett is worth ten lesser writers, so don't be put off: Nation is worth a read.

Posted by Civilian Reader at 11:20 AM